Dawn Has a Date With Astronomic Asteroids 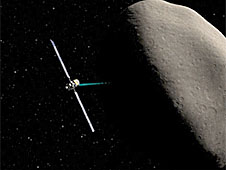 Shown orbiting the asteroid Ceres in this artist's rendition, the Dawn spacecraft is the first NASA space probe to orbit asteroids between Mars and Jupiter. Image Credit: NASA

Most people think of the solar system as the sun and the eight planets that orbit it. But if they look carefully at a depiction of the solar system, they will see an unusually large gap between the orbits of Mars and Jupiter. In this gap are more than a million small, rocky bodies called asteroids. These asteroids hold clues about the earliest stages of the solar system.

More than 4.5 billion years ago, the solar system was in its infancy and a disk-like cloud of gas and dust swirled around the sun. Proto-planets formed when the dust clumped together. But once the giant planet Jupiter was born, its strong gravitational force stopped the dust between Mars and Jupiter from becoming a full-fledged planet. Instead, a belt of rocky debris, or asteroids, remained.

Scientists believe that the asteroids would have accumulated together to turn into a planet if they had had a chance. But asteroids are valuable precisely because they prematurely stopped growing. They give scientists a snapshot of the early solar system frozen in time. From asteroids, scientists can learn what planets looked like when they were young and first beginning to form, as well as how different planets evolved and became what they are today.

NASA's Dawn spacecraft is on its way to the asteroid belt to research how the solar system formed and evolved.

Dawn will visit Vesta and Ceres, two of the most massive asteroids in the belt. Over time, most of the asteroids have broken into pieces because of collisions, and some have made their way near Earth. Small pieces of asteroids that have fallen to Earth are called meteorites. But Ceres and Vesta have not changed much since they were born more than 4 billion years ago.

Dawn embarked on its four-year journey to the asteroid belt on Sept. 27, 2007. After entering Vesta's orbit in August 2011, the spacecraft will study the asteroid for nine months before jetting off to reach Ceres' orbit in February 2015. Dawn is the first NASA space probe to orbit asteroids between Mars and Jupiter. 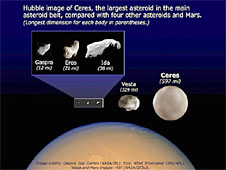 The size of asteroids Ceres and Vesta is compared with three other asteroids and Mars. Image Credit: NASA
> Full image

Why Vesta and Ceres?

NASA scientists chose to study Vesta and Ceres not only because they are similarly large, but also because of their differences. It turns out the asteroids, which are in different regions of the asteroid belt, are very different from each other even though they evolved around the same time. Vesta is similar to the rocky inner planets Earth and Mars, while Ceres seems to be more like the icy moons and bodies in the outer solar system. By comparing the two asteroids, scientists hope to understand how rocky planets formed as well as how various planets developed in different ways.

Until now, scientists have only estimated characteristics of Vesta and Ceres using images taken by telescopes and by studying meteorites that are believed to have come from Vesta. So far, scientists know the following about the two asteroids:

--Vesta, which is about the size of Poland, is a dry asteroid. It is the only known asteroid that has very distinct light and dark areas on its surface, much like Earth’s moon. This condition points to the asteroid’s having a complex surface with craters, lava flows and various minerals.

--Egypt-sized Ceres is a dwarf planet. It is thought to have lots of ice because its density is less than Earth’s. Observations thus far suggest that Ceres is covered with dry clay, which is a sign of water. Ceres is almost round, which suggests that it has layers inside. Astronomers suspect that Ceres has a rocky core wrapped with an icy mantle and a clay crust.

Using this information, scientists will try to answer the following questions about Ceres and Vesta:

Dawn is a partnership between the University of California, Los Angeles, and NASA's Jet Propulsion Laboratory in Pasadena, Calif., along with other universities, laboratories and companies in the United States, Germany and Italy.

The mission's Web site features various resources for students and educators, in support of NASA's goal of attracting and retaining students in science, technology, engineering and mathematics disciplines. The resources include a detailed teacher guide about dwarf planets and an accompanying student activity worksheet, as well as PDF tutorials on asteroids and meteorites. The new type of propulsion system on Dawn, called ion propulsion, is also covered in the teacher guides, tutorials and worksheets.

For students, the site offers interactive games and puzzles related to the Dawn mission. Students can, for example, design their own ion propulsion engine. Or they can try to identify different types of meteorites. In the process, students can learn more about the clues meteorites can provide about the asteroids they came from.

Fun activities specifically for children include puzzles and coloring sheets. Children can also make a Dawn T-shirt or a model of the Dawn spacecraft.