Growing up in rural North Carolina, Erica Alston came to define one of her life's missions as helping protect the natural beauty that surrounded her. She soon realized that to do that she must learn the universal and "binding language" of mathematics. Not one to shy away from a challenge, Alston jumped right in: "I wanted to become as fluent in that language as possible," she says. 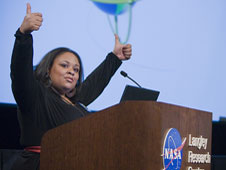 Alston works with the Chemistry and Dynamics Branch of the Science Directorate at NASA's Langley Research Center in Hampton, Va. She has delved into issues concerning national fisheries resources and atmospheric science. Her focus is now on air quality issues because "everyone has a vested interest in the quality of air we breathe."

Her work has benefited greatly from her mathematics skills, which Alston highlights as key to understanding the "nuts and bolts" of atmospheric science. She says that students' biggest challenge to understanding how Earth's atmosphere works often boils down to their problems with grasping the mathematics behind it.

"I think many more students would be interested in science if there was a better way to help students overcome the math barrier. Too many students feel like math is just too hard," she says.

What is Alston's advice? She recommends embracing the challenge and asking questions. The key is not to expect mathematics to be easy, she suggests, but to work hard at it and be ready to speak up when struggling to understand a concept. "This notion that everything we want to do should somehow always be easy is a misnomer," she argues.

For Alston, mathematics and science classes were most interesting when she learned how these fields impact her everyday activities. "The best thing my teachers ever did was to incorporate real-world applications into the lessons," she says.

This approach can be crucial, she stresses, when communicating with the public about Earth's environment and why it is important. Like students, the public struggles with many of the mathematics concepts scientists use to talk about climate change. But using examples that people can relate to can help make the connection clear in their minds.

"When people feel like it affects them personally," she says, "then they will be more engaged. And as a scientist, I try my best to convey to any and everyone what I do and why it is important."

Establishing a direct relationship between individuals and science also helps in another important way: drawing more women and minorities to the scientific fields. To overcome systemic issues that these groups still face, Alston says they must seek those environments that allow them to thrive. Fortunately, she believes that a lot of opportunities are now available to do this because of changes taking place in the nation as a whole, "because as a nation we are aware that as we change, we have to change our workforce," she adds.

For students, seeing people like themselves represented in science plays a large part in their choosing to study and have a career in that field. As an African-American, Alston is herself a role model to girls interested in earth science. Her advice is clear: "Pursue your passions." Taking the challenge to pursue them also means believing in yourself. "There have been too many female trailblazers in the sciences for you to believe that you cannot be one too," she adds.

If a task takes hard work, that is part of learning too. As Alston points out, "Do not be afraid of math and science." Throughout her education and career, mathematics and science have provided her the tools to better understand how Earth works. This understanding has enabled her to explain to others how they too can make a difference. "Everyone can do their part to change things for the better," she says.