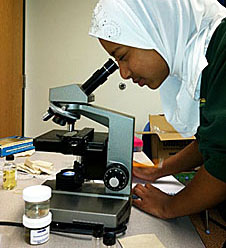 Experiment: All Mixed Up (Based on Gause's 1932 Experiment): The Effect of Microgravity on the Interaction of Paramecium bursaria and Paramecium caudatum in a Mixed Culture, Using Yeast and Bacteria as a Food Source

I was standing in front of the fourth- through sixth-grade students at Avicenna Academy when I told them, "We are going to be participating in the Student Spaceflight Experiments Program." I explained to them what that project meant. Then it happened -- the moment of recognition when a student fully grasped what I was saying to them. "An experiment will REALLY go to space ... not just pretend?" Yes. We're really going to send our science to space.

We welcomed the Life Learning Cooperative in Anderson, Ind., as our partners. "This is a dream come true," said Rhonda Gottschammer, co-director of LLC’s science club.

The experience has allowed for a diverse group of students to pool their intellectual resources and work together to determine how to go about answering a question. These students worked hard, and they all celebrated when a final proposal was selected for flight. 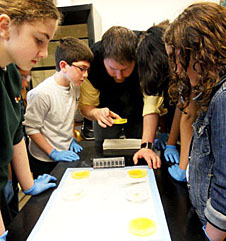 Some of Avicenna Academy's SSEP participants learn about embryonic heart development. One of their first interests was embryonic development in microgravity. Image Credit: SSEP

I truly believe that this has been life-changing for our students, without their even realizing it. We have raised the bar for each of them, and they have learned, through our participation in SSEP, that not even the sky is the limit. A student said to me, "You know how you tell us to reach for the stars? Well, we did." Jenna, a sixth-grader at Avicenna Academy, was right.

Educators dream of broadening their students' horizons. SSEP has far surpassed that. In July, some of our students stood at NASA's Kennedy Space Center in Florida and watched as space shuttle Atlantis took off with their hard work aboard.