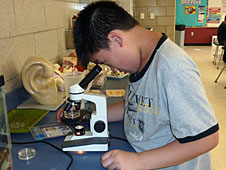 Experiment: Will Microgravity Affect the Development of Goldfish?

Students at Skinner West Classical, Fine Arts and Technology School in Chicago are called the Superstars, and their participation in the Student Spaceflight Experiments Program truly has allowed them to live up to that name. Students submitted 77 proposals to the school's microgravity experiment design competition! The experiment proposals showed a lot of creativity, involving a wide range of scientific disciplines. On May 10, a panel of judges from Chicago's finest educational and research institutions narrowed the 77 proposals down to three finalists.

Our winning proposal, "Will Microgravity Affect the Development of Goldfish?" was written by a team of fifth-graders. While the fifth-grade team members take primary responsibility for the experiment, the entire school community has become involved in the project. Everyone has become very fond of the new class pets, goldfish Atlantis (female) and Endeavour (male). Students have had the chance to observe the physical appearance of the fish, their eating habits and their behavior. We also have used this project as a jumping-off point to teach younger students how to use microscopes as they observe fish scales and eggs. 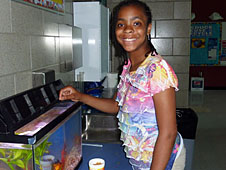 We already can see the positive impact on the students -- even the students whose experiments didn't win. More than one student has mentioned a new interest in studying science and engineering in college, and several students now are aspiring to careers as astronauts. We are so grateful to SSEP and our sponsor, the Motorola Solutions Foundation, for making this experience possible. Even though this particular program is "once-in-a-lifetime," we know that at least some of our students will continue in the path of space studies, and they may even become the next generation of space pioneers.