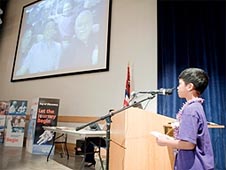 La'akea, a student from Pearl City Elementary School in Honolulu, asks a question to the crew members of the space shuttle Discovery via a live video downlink. Image Credit: Keith Uehara, KUPROHAWAII

Students from Punahou School, the alma mater of Hawaii's second astronaut and of President Obama, spoke with the crew of the STS-119 space shuttle mission on March 27 as the astronauts were preparing to come home. They talked about teamwork, mission preparation and the importance of education.

The 12-day STS-119 mission to the International Space Station delivered the station's final set of solar arrays. On day 11 of the mission, crew members answered questions from students on the Hawaiian island of Oahu.

"Aloha and welcome, from Hawaii and Punahou School," announced Art Kimura, one of the coordinators of the event.

Students talked with the STS-119 astronauts for about 20 minutes, asking questions like what landmarks can be seen from space, what do astronauts do in their free time, and how are emergencies handled in space. Participating in the downlink were STS-119 Commander Lee Archambault, Pilot Tony Antonelli, mission specialists John Phillips, Joseph Acaba, Richard Arnold and Steve Swanson, and Expedition 18 Flight Engineer Sandra Magnus.

"Why do you believe you were chosen for this mission, and how are astronauts combined as a team on different missions?" a student asked.

"I was chosen to be part of the EVA (extravehicular activity) team on this mission," answered Arnold, who in addition to being a mission specialist on STS-119 is also one of NASA's educator astronauts. "All of us have different skills, just like all the folks in your classroom do. What our office tried to do is to match people with the different skills to bring together to form a good team to get the job done."

Another student asked mission specialist and educator astronaut Joseph Acaba how his experiences as a reservist in the U.S. Marines, a member of the Peace Corps, and a high school math and science teacher prepared him for his mission in space. 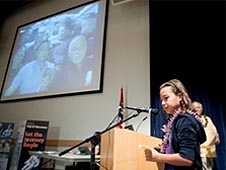 Crista was one of several Honolulu students who asked the STS-119 astronauts about their mission and what it is like to be in space. Image Credit: Keith Uehara, KUPROHAWAII

"I learned a lot of different things from those jobs, and I think it made me a very well-rounded person," Acaba said. "When I was in the Marine Corps, I learned a lot about discipline and self-confidence. When I was in the Peace Corps, I learned a lot about independence and living in remote areas, kind of like we are now up in space. And as a teacher -- as your teachers know and as you probably see every day -- teachers are very flexible and have to think on their feet, and I think all of those have helped me get to where I am today."

Similarly, another student wanted to know what skills Acaba learned as a teacher that helped him as an astronaut.

"Teachers and astronauts, they have to use a lot of the same skills," he said. "I know as a teacher, every day you came into the classroom, something different would happen. You kids always make it exciting for teachers, and (as a teacher) you could really never plan for everything. And up in space, we have the same thing happen to us. We come in with a game plan, but you never know if it's going to work perfectly. And if it doesn't, you need to be able to find a way to work around that, and I think we do the same both as astronauts and as teachers."

One child asked, "How do you share the knowledge you learn in space with school kids like me?"

STS-119 Pilot Tony Antonelli responded that besides flying airplanes and flying in space, his favorite part of being an astronaut is talking to students. "I know you've probably heard this before, but what I've learned in space is the same thing, that everything you need to know you learn in kindergarten: be nice to others, put things back where you found them, eat well, exercise and study hard, and do your best at everything you do."

The commander of STS-119, Lee Archambault, also passed on a special message from a former Punahou student. "This is a real thrill for us," Archambault said, "and in addition, we had a chat the other day with a fellow named President Obama, and he asked us to send his regards along and to say 'Aloha.' So with that we'll sign off and wish you very well, and we hope you enjoyed this as much as we enjoyed being here." The crew had talked earlier in the week with President Obama, members of Congress and school children in Washington, D.C. 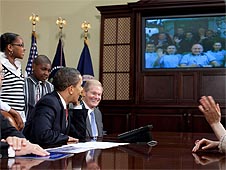 President Obama was joined by members of Congress, including former astronaut Sen. Bill Nelson, right, and school children, as he talked with astronauts on the International Space Station from the Roosevelt Room at the White House. Image Credit: White House Photo/Pete Souza

The experience was quite special for some Punahou and Pearl City students who had met Acaba three years ago when he came to their schools. In 2006, Acaba attended the annual Astronaut Lacy Veach Day of Discovery event, hosted at Punahou, and Pearl City's NASA Explorer School kick-off event. Veach is one of two NASA astronauts to come from the Aloha State. Ellison Onizuka was Hawaii's first astronaut.

The downlink with the STS-119 crew members is not the first time students in Honolulu have talked to an astronaut in space. During Veach's second spaceflight, in 1992, a three-way satellite communication linked Hawaiian students with Veach on the space shuttle Columbia and navigator Nainoa Thompson on the Hokule‘a canoe in the Pacific Ocean.

Art Kimura, an education specialist with the Hawaii Space Grant Consortium, said events like the live downlink create a lot of excitement about NASA and spaceflight for the students involved. For the Space Grant Consortium, he said, it is part of ongoing outreach to stimulate interest and educate the public and students about careers in science, technology, engineering and mathematics.

The questions asked during the event were chosen from submissions by students from Punahou, Pearl City and other area schools participating in a math and science partnership with Hawaii Space Grant. "There were some interesting questions," Kimura said, "not just the typical 'what do you eat' and 'what do you enjoy' and 'what was the launch like.'"

Students from Punahou, Pearl City and the partner schools asked the selected questions. Questions also were asked by a student who is the child of an active-duty military parent serving in the 25th Infantry Division, Schofield Barracks, currently deployed in Iraq, and by one who is the child of an Army military reservist parent serving in the 100th Battalion, 442nd Infantry, currently deployed in Kuwait. Kimura said the students from military families represented the strong military community in Honolulu. 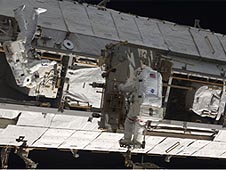 The education community in Honolulu was particularly excited about the STS-119 mission because Acaba and Arnold are both educators in addition to being astronauts. During the mission, both men performed two spacewalks each. Their last spacewalk was done together.

"We never imagined teachers would be doing spacewalks a few years ago, but there they are," Kimura added.

"The things I enjoyed the most was the can-do attitude everybody had," Kimura said. "Everyone said, 'How can we make this happen in our community?'"

NASA in-flight education downlinks are coordinated by the Teaching From Space Project at NASA's Johnson Space Center in Houston. Downlinks like this one support NASA's goal of attracting and retaining students in science, technology, engineering and mathematics.