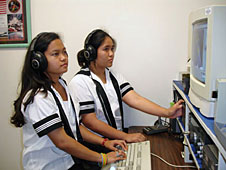 In America and around the world, students use amateur radios to talk to astronauts high above Earth on the International Space Station. And students at an all-girls school in Hawaii help make the connection.

Sacred Hearts Academy, an all-girls K-12 school in Honolulu, is a telebridge station for the Amateur Radio on the International Space Station program. ARISS is a NASA education activity where astronauts and cosmonauts use amateur radio equipment aboard the space station to talk with students around the world. Telebridge stations, like the one at Sacred Hearts, connect schools, museums and others without their own amateur radio equipment to astronauts in space.

Sacred Hearts became involved in ARISS by first being a telebridge station for the Space Amateur Radio Experiment. SAREX used amateur radio equipment aboard the space shuttle to connect astronauts in space with students on the ground.

Sacred Hearts built its amateur radio ground station with help from local amateur radio operators and private industry. The project was funded by the school and a generous corporate grant in 1993. The school had its first radio contact with the space shuttle in the summer of 1994.

"On the morning of July 10, 1994," recalled retired Sacred Hearts teacher Nancy Rocheleau, "you could feel the excitement in the air as hundreds of students packed the academy's auditorium to witness their classmates in grades 3, 5, 7, 9 and 12 ask questions and receive answers from astronaut Bob Cabana about life on board the space shuttle and the experiments that were being performed on STS-65. They watched spellbound as the path of the shuttle was projected on a wall-size map via computer simulation."

"On the news that night, one student remarked how amazing it was that she, a tiny speck on the Earth, was able to talk to an astronaut flying hundreds of miles overhead traveling at 17,500 miles per hour."

After that first contact, Rocheleau, who was then chairperson of the academy's science department, said the academy offered a course called "Space: A Technological Approach to Integrating Math and Science" in which 20 girls learned amateur radio theory and earned their amateur radio licenses. 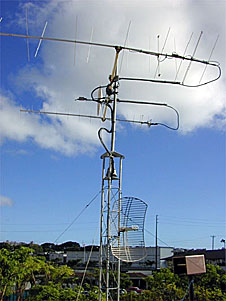 Sacred Hearts established an amateur radio club for girls in grades 7-12. The club initially supported SAREX and then, in 2000, began supporting ARISS. Club members prepare the school's amateur radio station for telebridge contacts so students around the world can have the same exhilarating experience talking to astronauts as the academy students did, Rocheleau said.

Prior to a contact, students prepare the station by checking the antenna steering and radio operation and loading the most recent orbital elements into the computer. Students then run a satellite-tracking program to generate a table of times versus spacecraft position, so the antenna can be steered manually in the event of a computer problem during the contact. Once the equipment is checked out and ready, a call is made to the conferencing center. The center links the participating school students, the ARISS moderator and the Sacred Hearts Academy amateur radio station team.

Since 1993, the Sacred Hearts station has run more than 70 contacts, giving students from all corners of the globe a chance to ask questions to astronauts aboard the shuttle and station.

Every contact is memorable to the students involved, Rocheleau said, but several of the school’s most memorable experiences were contacts with astronaut Eileen Collins, the first female commander of the space shuttle; Dennis Tito, the first spaceflight participant; William Shepherd, the first commander of the International Space Station; and astronaut Sunita Williams, in a 2007 telebridge with a school in New Delhi, India.

After William Shepherd returned to Earth, he visited the academy and addressed the entire student body. He shared his experiences as an astronaut and answered students' questions about life in space. "One of the perks is several astronauts have come and talked to our students in the school's gym," Rocheleau said. "Edward T. Lu came. Charles Lacy Veach came. William M. Shepherd came, and Ellen S. Baker came. So when they come to Honolulu, we can say, 'Hey, we've contributed to the program; could you come talk to our students?' It's very exciting for the girls." 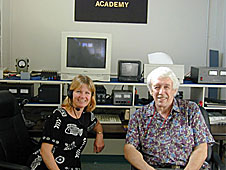 Amateur radio operator Dick Flagg handles the technical aspects of the station. Flagg said the school’s location is a major factor in Sacred Hearts' success as a telebridge station for the ARISS program. "There's less potential for interference out here in the middle of the ocean than there is on the mainland, and I think that's one of the advantages that we have," Flagg said. "The schools on the mainland might want to have a radio contact during the day at some convenient time. That turns out to be like three o'clock in the morning for us here. So very frequently, we're running these contacts sometime between midnight and dawn, when most of the other ham radio operators are asleep and there's very little chance of interference. We've had a very good success record of making contacts."

"Although many contacts occur between midnight and dawn, there are often several students and their parents eagerly monitoring the contact," Rocheleau said.

Rocheleau said the school administration, especially principal Betty White, has always emphasized the importance of science and technology education. They developed a scope and sequence for teaching students various computer technologies. NASA has been instrumental in helping Sacred Hearts Academy expand its STEM activities, she said.

In addition to involvement with ARISS, radio club members served as beta testers for NASA's Radio JOVE project. Radio JOVE is an educational outreach activity run by NASA's Goddard Space Flight Center in Greenbelt, Md. The project allows students, teachers and the public to learn about radio astronomy by building their own radio telescope from an inexpensive kit and/or using remote radio telescopes via the Internet.

Sacred Hearts students also participate in For Inspiration and Recognition of Science and Technology, or FIRST, robotics programs and VEX Robotics.

"We've been very fortunate in having the opportunity to let the students participate in this kind of activity," Flagg said, "Many of the girls have gotten a lot out of it, and it's hopefully been instrumental in their future careers and life paths."

Schools may apply for ARISS contacts by contacting NASA's Teaching From Space office at JSC-TFS-ARISS@mail.nasa.gov.