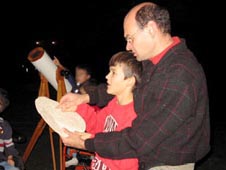 The field of astronomy is very visual and can be challenging to teach to people who are visually impaired. For more than a decade, David Hurd has embraced this challenge as a space science professor at Edinboro University of Pennsylvania. Hurd and his wife Robin have worked through his university and with NASA to develop tactile, or textured, products that can be used in teaching about space to students who are visually impaired.

"So much of space is still so visual and so out of reach for them," Hurd said.

Hurd and tactile engineer John Matelock began creating tactile astronomy tools because a student with a visual impairment signed up for Hurd's introductory astronomy course. The course was primarily visual and auditory -- students used the university's planetarium, where Hurd pointed to and described what was there. Hurd and Matelock created a tactile star chart and a planisphere, which is used for determining the positions of the stars at a given time. Over the years Hurd has built a library of tactile charts, graphs and models.

Robin Hurd said it helped that her husband and Matelock shared a passion about astronomy. "I have a feeling John (Matelock) stayed up till midnight some nights making tactiles because he was so excited to be doing something astronomy-related," she said.

One of the Hurds' star products is a Tactile Guide to the Solar System. The guide is based on an earlier version that originated with NASA scientist Steve Dwornik and was developed by Ball Aerospace & Technologies Corp. and Cass Runyon, a professor at the College of Charleston in Charleston, S.C. The guide illustrates the comparative size and distance of the planets in the solar system. It also details the individual characteristics of each planet. The objects in the guide are not smooth, like a ball, but textured so students can understand that planets have unique surface features.

"One of our passions is to make these things feel like they look," said David. "The easy way to do tactile material is to outline it, make dots for sun spots or solar flares, but it really doesn't feel like it really looks. So we try to come up with creative ways to make our tactiles feel like the images look."

The Hurds used materials such as cork and sand to produce a three-dimensional mold, called a master, to make objects "feel as they look." For example, satellite pictures of the sun show the sun as fibrous and bubbly, Robin described. The Hurds created a sun out of Spanish moss to give it that fibrous, bubbly feel. "So that when you feel the sun, you actually perceive the texture and can relate it to the actual image of the sun. This helps 'viewers' realize it is not like a smooth ball," Robin said. 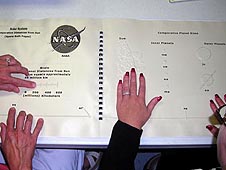 The Tactile Guide to the Solar System illustrates the size and scale of the planets in the solar system and also details the individual characteristics of each planet. Image Credit: David Hurd

The Tactile Guide to the Solar System includes a CD with digital talking text. The CD works with text readers, which convert text to speech, and refreshable Braille technology, which converts text to Braille. The digital talking text allows users to access detailed information about each planet and NASA missions. The guide is part of the Lunar Nautics Toolkit, available through NASA's Central Operations of Resources for Educators, or CORE.

In addition to working with students with visual impairments at Edinboro University, Hurd has four sons, none of whom are blind but three of whom have other disabilities. The youngest two are identical twins with physical disabilities that affect their walking and speech. The Hurds' middle son has mild autism and problems with auditory processing, social cues and non-verbal signals. "On a personal level, our passion for meeting the needs of people with disabilities comes partially because of the learning differences we see in our own kids," Robin said.

The development of tactile materials is just another way of inspiring the next generation of explorers, David Hurd said. "The difference is we're inspiring explorers who were overlooked in the past, and that's what's really exciting about what we're doing."

Hurd and Matelock's early products were created through the university. Matelock has since retired from the university, and David and Robin Hurd now develop tactile products and teaching materials through AAC Core Concepts. AAC stands for Alternative and Augmentative Communication. The Tactile Guide to the Solar System was developed in cooperation with NASA in support of the agency's goal of engaging Americans in NASA's missions.

In May, David and Robin Hurd were invited to attend a NASA Education forum in conjunction with the launch of the STS-125 Hubble Servicing Mission. The STS-125 mission carried into space two Louis Braille Bicentennial Silver Dollar coins to recognize the critical role Braille plays in the pursuit of careers in math and science by the visually impaired. This commemorative coin, only available until Dec. 11, 2009, is the first U.S. coin to have readable Braille. As authorized by Congress, the United States Braille coin will fund efforts by the National Federation of the Blind to reverse the Braille literacy crisis in America. After Dec. 11, any unsold coins will be melted.

It was Hurd's first time to see a space shuttle launch in person. "Even though I'm in the fringe -- and most people are in the fringe when you go to something like that -- you feel like such a part," Hurd said about participating in the launch. "It takes everybody to make that happen, from the engineers to the astronauts themselves, from the business people to those involved with education and public outreach, from the school administration to the school teachers to the students.

"It was so neat to feel that kinship. Even though we couldn't be on board, we were part of that launch."