Grow Text SizeShrink Text Size
What Is a Planet? 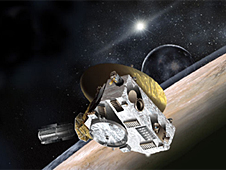 The New Horizons spacecraft is scheduled to reach Pluto in 2015. Image Credit: NASA

This seemingly simple question doesn't have a simple answer.

Everyone knows that Earth, Mars and Jupiter are planets. At least, they are for now. For many years, Pluto was considered a planet too. But astronomers began to question Pluto's planetary status when they started to find celestial bodies near Pluto that were similar in size and composition.

In 2006, astronomers at a meeting of the International Astronomical Union, known as the IAU, debated the definition of a planet. Eventually, they decided on a new definition -- one that did not include Pluto. Suddenly, the solar system was down to eight planets instead of nine. Pluto was demoted to a "dwarf planet."

In the "What is a Planet?" activity, targeted for grades 9-12, students take part in a debate similar to the one held by the IAU. They debate whether "Pandora," a fictional solar system object discovered by NASA's New Horizons spacecraft, is a planet.

New Horizons launched in January 2006. It is scheduled to reach Pluto in 2015. The spacecraft carries several sensors that will probe Pluto and other bodies beyond Neptune's orbit in an area of the solar system known as the Kuiper Belt.

"What Is a Planet?" starts by challenging students to classify solar system objects based on their physical characteristics. Space is filled with billions of objects, including planets, moons, comets and asteroids. Scientists classify these objects for the same reason most people organize clothes in their closet -- so that it's easier to keep track of them.

As a final assignment, students create their own definition for the word "planet."

"What is a Planet?" addresses national education standards in science and history. Teachers should expect to allow three class periods, or about 135 minutes, for the activity.