Grow Text SizeShrink Text Size
Night and Day
In the wee hours of Feb. 8, 2010, a small group of California Girl Scouts witnessed the night sky instantly turn to day at the launch of the STS-130 space shuttle mission.

The group gathered at the launch viewing area at NASA's Kennedy Space Center on the morning before but was disappointed when the launch was scrubbed because of low clouds. 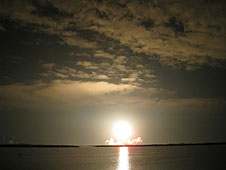 The STS-130 launch treated viewers to a spectacular show as the flames from the shuttle's two solid rockets lit up the night sky. Image Credit: Girl Scouts of Northern California


View Larger Image
Fifteen-year-old Kjersti Chippindale said the scrub greatly increased her eagerness for the shuttle's second launch attempt. "(On the first launch day) we were out there waiting for it, waiting for it, and it was like three in the morning ... and the anticipation was so intense just waiting for it to go off, and then they postponed it. The next night was even more intense. We were barely talking we were so intensely waiting for it."

This time there was no last-minute scrub.

"It was pitch black, and when the burners went off it lit up the sky like it was daytime," Kjersti described. "It's so incredibly bright you want to close your eyes, but you can't because it's also so incredible."

Girl Scout Maddie Atkinson described standing on the bleachers at Kennedy's Saturn V Center with hundreds of other people and at the end of the countdown seeing a big flash of light. It was bright like the sun, she said, and it just kept rising higher and higher, getting brighter and brighter as it went. "A couple of seconds after it was off the ground, you got this huge wave of sound that shook everything. It was like this cracking sound. It was really cool."

Kjersti said it was the kind of sound you feel in your chest. 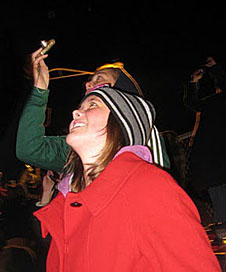 This was the first time any of the girls had seen a space shuttle launch. The opportunity came about through the suggestion of the W Foundation, a nonprofit space education corporation in Novato, Calif. Holforty, who has worked with the Girl Scouts of Northern California for several years on engaging girls with NASA content and opportunities, said the foundation contacted her about wanting to send a group of Girl Scouts to a shuttle launch. The W Foundation worked with NASA's Space Operations Mission Directorate to arrange the opportunity. Girl Scouts were invited to apply for the opportunity and were selected based on their interest in STEM. Holforty noted that the girls paid their own way to the launch, with help from scholarships and individual sponsors.

After the scrub, Holforty said she felt disappointment for the girls. But after the successful launch on day two, she said that seeing the scrub was a good experience for them. "I think they really had the best opportunity," she said. "They didn't go and show up and have everything work perfectly. They also didn't have the disappointment of going all the way there and not getting to see it (launch)."

While the launch certainly carried a high wow-factor with the Girl Scouts, they also were impressed with other unique opportunities that were part of the launch experience. One of those was touring NASA's Vehicle Assembly Building where the space shuttle is readied for launch. Maddie said the building -- one of the largest in the world -- didn't look that large from the tour bus. "But when you stand there, it was so much taller. It was just this immense building where they built these amazing machines."

In between NASA tours and the launch, the group squeezed in a day at Walt Disney World's Epcot theme park. Even there, Holforty said she was bringing in NASA and science, technology, engineering and mathematics, or STEM, content. "They got to see fun stuff as well as the technical stuff at NASA," she said. "But we made the fun stuff about science. We went to Disney World, but we made them think about the science and engineering behind the fun stuff they were seeing. It takes an engineer to make an amusement park ride. It exposes girls to other ways they can use a science and technology background besides pure hard-core research."

Going into the experience, all six girls had some sort of interest in NASA or STEM. Holforty said the launch opportunity showed them, up close and personally, the excitement of NASA missions and space exploration and that it is possible for them to be involved. 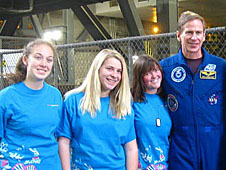 During a tour of the Vehicle Assembly Building, the Girl Scouts met and talked to astronaut Mike Gernhardt. Image Credit: Girl Scouts of Northern California

Violet is involved in FIRST LEGO League robotics and is interested in being a robotics engineer. For Inspiration and Recognition of Science and Technology, or FIRST, engages young people in science, engineering and technology through robotics competitions. The 15-year-old said someday she'd like to make rovers or satellites to go to other planets. "I've always really liked robots, and being in FIRST made me see that I really want to be a robotics engineer and made me see that I can actually do that."

Kjersti also participates in FIRST LEGO League. She has been a Girl Scout since the third grade and is in her second year with FIRST. She enjoys science and mathematics but right now is leaning more toward a career teaching one of those subjects than doing hands-on research herself.

After the Air Force Academy, she hopes to go to pilot school and fly jets. From there she wants to transition to a NASA pilot. And from there, she wants to go to space. "I want to maybe become an astronaut if I can get there," she said.