Grow Text SizeShrink Text Size
The Future of Plants Is Up in the Air
All across the country, students of all ages, from kindergarten to college, are exploring how to grow plants in space. Plant growth will be an important part of space exploration in the future. NASA is planning long-duration missions to the moon and beyond, and scientists anticipate astronauts may be able to grow plants at these outposts.

Biology teacher Angela Krause-Kuchta led students in designing an experiment on the effects of microgravity on the uptake of nutrients by plants. Image Credit: Doug Goforth

"The use of plants in long-duration spaceflight has many applications," explained Angela Krause-Kuchta, a Wisconsin biology teacher who is leading students in plant growth investigations. "Growing a variety of plants will provide food and oxygen for astronauts as well as act in bioremediation of wastes.

"Furthermore, plants will be an integral part in maintaining crew morale. Being in a room with plants reduces stress and promotes a sense of calm by reducing blood pressure and heart rate."

With these things in mind, students are doing experiments with plants to learn more about meeting the challenges of growing plants in space. An opportunity offered to NASA's Network of Educator Astronaut Teachers allowed several student teams to test out their theories in reduced gravity.

NEAT is a group of nearly 200 K-12 educators created as part of the Educator Astronaut Project. NASA provides NEAT teachers with professional development opportunities, including the chance to participate in NASA's Reduced Gravity Flight Opportunity. This project allows students and mentors to design, build and fly experiments on a special reduced-gravity aircraft. The plane makes a series of steep climbs followed by steep dives, called parabolic arcs, resulting in short periods of microgravity. The plane also flies patterns to simulate lunar and Martian gravity.

Krause-Kuchta's students at Menomonie High School in Menomonie, Wis., were one of just 10 teams selected for flights in 2008. Her students investigated the effects of microgravity on the absorption of nutrients by plants. Students used food coloring in water to simulate nutrients.

The experiment placed the stem of a plant in a chamber of colored water. Water samples were collected from a control experiment on Earth and during simulated microgravity on the NASA flight. Students used a spectrophotometer to determine the relative concentration of food coloring in each sample.

"In analysis of our data, however, we saw no difference in the uptake of food coloring (simulating nutrients) between the plants in flight and our control plants on the ground," Krause-Kuchta said. "We suspect, however, that the lack of noticeable difference between the flight and ground data may be due to the short duration in which the plants experienced microgravity."

Krause-Kuchta said the experience gave students the opportunity to apply the scientific method in a real-world format and analyze data with the answers being unknown. "This is much different from what often happens in science classrooms where laboratory experiences are designed to demonstrate concepts that have known outcomes," she said. 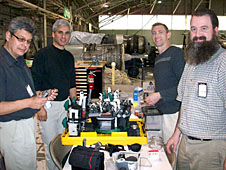 It also engaged students across several subjects, specifically biology and social studies. "This may seem like an odd combination," Krause-Kuchta said, "yet the connection between progress in science is directly linked to what happens in society, and society, in turn, fuels imagination and ingenuity for progress."

"In order to grow healthy plants on the International Space Station and eventually on the moon and Mars, systems will need to be developed that facilitate proper nutrient dispersal to the roots of the plants," Loewen explained.

Students designed a chamber to test multiple delivery systems for effective soil saturation. During the flight, the systems were tested in microgravity, lunar gravity and Martian gravity. Students compared the in-flight results with how the systems performed on Earth.

They observed that in reduced gravity -- whether it was one-sixth of Earth's gravity like on the moon, one-third gravity like on Mars or microgravity like in Earth orbit -- the water injected into the plant growth chambers formed bubbles and didn't drain through the soil.

"You can inject water in the plant growth chamber rather easily," Loewen said. "The problem comes with draining and excess water around the roots and how to get rid of that."

The team received an honorable mention for their project in their first year competing at the Central California Regional Science, Mathematics and Engineering Fair. Loewen said one of the biggest lessons from the experience was showing students the importance of research and how cutting-edge research is beneficial not only to the space program but also to life on Earth.

"My students came to understand the scientific process in a very unique and relevant way," Loewen said. "They learned the importance of developing clear goals and objectives and creating procedures to test their hypotheses. This real-world experience was fundamental in developing a deeper understanding of the curriculum and application of the science principles the students have been learning in their classrooms." 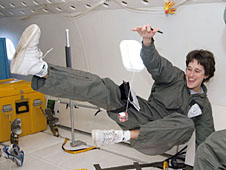 Eleventh-graders in Milan, Mich., also looked at watering plants, specifically how capillary action works under various gravitational forces. Capillary action is what allows water to travel up a tube, even under the effects of gravity.

The experiment used two sets of capillary tubes to test the capillary action of water alone and to test water with plant food added. The movement of the liquids was measured during every parabola.

Students concluded that plants in reduced gravity should have no difficulty taking in nutrients through capillary action. "According to our data, as gravity decreased, the height of the water columns using plant food and water increased more dramatically," Hasselbring said. "The presence of nutrients may enhance capillary action in reduced gravities. This may allow plants to take in nutrients more efficiently."

Hasselbring's project also worked across the curriculum, incorporating lessons in geometry, statistics, biology and physics. "This experiment provided our students an opportunity to see how our various subjects function together cohesively in the real world," Hasselbring said. "It was exciting to hear our students talking about science in my math classroom or vice versa. They were making connections on their own across the curriculum. To us, this was powerful and not something normally experienced in class." 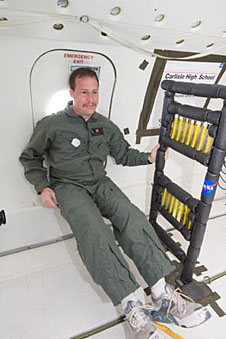 Loren Lykins' students designed an experiment to test the effects of reduced gravity on the porosity and compaction of various soil types. Image Credit: Doug Goforth

A group of students from Texas looked more closely at the kinds of soil that may be used on the moon or Mars. Students from Carlisle High School in Price, Texas, designed an experiment to test the effects of microgravity, lunar gravity and Mars gravity on porosity (how porous a material is) and compaction in various soil types. The experiment tested simulated lunar and Mars regolith, crushed lava rock, potting soil, and talc.

Carlisle science teacher and NEAT member Loren Lykins said changes in soil porosity could influence factors such as the absorption and retention of water and nutrients, and a soil's capacity to support plant growth. "Soil compaction is important when considering the growing of plants and the anchoring of structures on Mars," Lykins said.

The results of the experiment showed a direct correlation between the amount of gravity and the resulting soil compaction. The percent of porosity for each soil type increased in reduced gravity.

Carlisle students learned not only science from the study, but also about NASA careers. "Our (NASA) mentor, Alma S. Tapia, came to Carlisle and talked with students from kindergarten through high school," Lykins said. "She inspired many students."

Projects like the Network of Educator Astronaut Teachers and the Reduced Gravity Flight Opportunity support NASA's goals of attracting and retaining students in science, technology, engineering and mathematics and of strengthening NASA's and the nation's future workforce.