Grow Text SizeShrink Text Size
The Code of the Space Robots
This past December, two teams of Idaho high school students had the rare opportunity to interact one-on-one with robots and astronauts on the International Space Station. The students participated in a competition in which they wrote computer programming code that controlled small bowling-ball-sized robots floating on the space station. 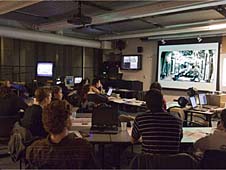 On Dec. 9, 2009, the Zero Robotics pilot teams observed the demonstration of their code running on the SPHERES robots aboard the space station. Image Credit: MIT


View Larger Image
The students were participating in a pilot version of the proposed Zero Robotics program, a project that aims to involve high school students in the SPHERES satellite project. SPHERES stands for Synchronized Position Hold Engage and Reorient Experimental Satellites.

SPHERES lead scientist Alvar Saenz-Otero said the SPHERES project was sent to the space station to test how to control multiple satellites. SPHERES was developed by the Massachusetts Institute of Technology Space Systems Laboratory, in conjunction with NASA and the Defense Advanced Research Projects Agency, or DARPA.

MIT doctoral student Jacob Katz explained the purpose of SPHERES: to take advanced ideas about formation flight and docking and apply them in the real environment on the space station. "We've done tests where a satellite attempts to dock to a tumbling target, rotating around as if it was out of fuel, and we've done tests of formation flight where satellites are rotating in a formation and a third satellite comes in and joins it," Katz said.

SPHERES has been operating on the space station since 2006. MIT students are already involved in the project. Katz said the proposed Zero Robotics program extends the kind of research being done to even younger students.

The idea for Zero Robotics originated with astronaut Greg Chamitoff, an MIT graduate and a flight engineer and science officer during Expeditions 17 and 18 on the space station. Chamitoff came to MIT with the idea hoping to get students involved in science and engineering aboard the station. "Not just a competition to possibly get something up there or work with something up there," Chamitoff said, "but an ongoing competition where students could be designing software for new applications with robots we already had on board.

"I saw this as a way to have students involved, not just for a one-time deal, but for an ongoing project on the space station that could have them very excited about what's going on in space and thinking about how to do things out there."

Greg Chamitoff worked with SPHERES in the U.S. Laboratory during Expedition 17 on the International Space Station. Image Credit: NASA


Chamitoff said SPHERES was a great platform to launch the student project because the equipment was already on the station and was ready to use. "Students could start off right away designing algorithms and software and have competitions and things like that, and later on down the road at another phase we could possibly add new hardware and capability and then more capable software competitions."

Many of the students had little or no programming experience before the project. After a tutorial on how to program the robots, the teams strategized, designed and then tested their commands in a computer simulation environment. Next, MIT students tested the high school students' software using hardware at MIT. The best code was chosen to run aboard the space station during the Dec. 9, 2009, demonstration.

Bonners Ferry student Keith Cancel said working with the SPHERES project added practicality to the math learned in school. The computer programming he learned through this project was a real-life application to what's being done in the classroom. "Once you get the skill sets of programming down, it's about strategy," Cancel said. "To be able to send something I programmed, or me and my team (programmed), is pretty incredible, especially considering we're only in high school."

Cancel noted that there was a big difference between the simulation and SPHERES. "It's a huge jump when you do a simulation and the real thing," he said. "It's a $70,000 satellite. You can't just bang them around."

While at MIT for the downlink event, students toured the school's labs and facilities and got a feel for the kinds of research going on there. Two of the students on the project, Jake Taylor and Jake Kaessinger, have both applied to MIT. Taylor is planning to major in computer science, and Kaessinger is interested in mechanical engineering, specifically alternative energy and robotics. Zero Robotics participant Nick Induni was chosen as one of 72 students worldwide to attend the Summer Science Program (an MIT-/Caltech-sponsored program) this summer at Westmont College. This is an intensive science research program, and Induni believes having the Zero Robotics and SPHERES experience helped him to be accepted to the program. 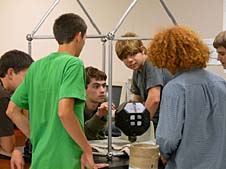 At the Zero Robotics pilot kick-off meeting, students got a look at the SPHERES robots they would be programming. Image Credit: MIT


View Larger Image
Chamitoff said his vision for Zero Robotics is that students compete to fly different algorithms on the current platform, and the next step would be to modify the SPHERES with more advanced capabilities -- robotic arms, vision, voice recognition, voice, the ability to pull up and display information to a crew member, and the ability to relay procedures and communications. "We can do a lot of things to make them more autonomous and more capable for doing tasks or helping with tasks, and the design of that could also be something students could be involved in as a competition."

His ultimate goal is an ongoing engagement between students and the space station. "The space station is a national laboratory and accessible to industry and academics, and so it's a perfect platform for us to do this," he said. "I'm just hoping that what we're going to see happen with this particular facility for the next five, ten years is that it would really stimulate a lot of interest and a lot of excitement with students, at all levels."