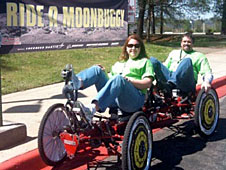 Have you ever been backstage at a concert or a play? Normally, such entertainment events are enjoyed from in front of the stage. Watching from the wings, however, can be an interesting and unique experience that few people get. It's cool just to have the opportunity to see behind-the-scenes.

That's the idea behind Taking Up Space, a new blog by NASA education writer Heather R. Smith. A member of the NASA Educational Technology Services team, Smith writes feature stories and homework help articles for the For Students and For Educators sections of the NASA homepage.

The blog currently is giving students a unique way to go behind the scenes -- allowing them to help choose questions that will be asked during a live conversation with astronauts aboard the International Space Station.

Taking Up Space is Smith's second NASA blog. The first, Free Falling, chronicled her adventures covering a team of college students as they conducted an experiment in microgravity through NASA's reduced-gravity student flight opportunity project.

"What we wanted to do with the Free Falling blog was use the blog format to engage students in the complete reduced-gravity flight experience," Smith said. "We had great feedback with the blog, with excitement both inside and outside NASA. The students I shadowed that week were telling parents, grandparents and friends back at their universities about being highlighted on the blog, and they were all posting links on Facebook and Twitter."

As a former newspaper reporter, Smith is experienced in working a "beat," and with the Taking Up Space blog, she gives her readers a behind-the-scenes look at her work covering the NASA education beat. 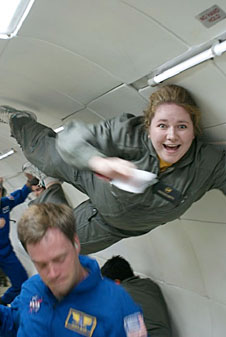 The job has involved interesting experiences at a number of NASA centers -- from floating on the microgravity aircraft flight at Johnson Space Center in Houston to walking through a wind tunnel at Ames Research Center in California to watching experiments in a microgravity drop tower at Glenn Research Center in Cleveland, Ohio, to riding in a student-built moonbuggy at the Great Moonbuggy Race sponsored by Marshall Space Flight Center in Huntsville, Ala. Taking Up Space gives a firsthand account of what those experiences are like.

Smith also meets and interviews interesting people -- from underwater astronauts to rocket scientists to the student interns who will be the vanguard of future exploration. Her feature stories report the information those people have to share with students, but the blog reveals what it's like to watch someone you've actually met and talked to multiple times launch into space.

"The thing I'm most thrilled about with Taking Up Space is getting to tell students' NASA stories. There are so many students involved with NASA, whether it be through internships or cooperative education programs, research projects or contests. I write about these students in a very traditional style on the For Students pages, but the blog lets me tell some of those stories in a way that I think is more exciting and interesting and engaging."

And, most importantly, the goal of Taking Up Space is to share information with students about how they can experience things like these themselves. NASA has an entire universe of opportunities available to students and is eager for tomorrow's scientists and engineers to get involved with the agency and its missions today!