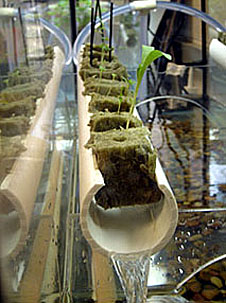 Two years ago, a NASA Engineering Design Challenge asked students to think about the possibility of growing plants on the moon and then to design, build and test lunar plant growth chambers. On future long-duration missions on the moon, fresh-grown plants could be used to supplement meals.

A group of high school students from New Jersey not only came up with a unique way to grow plants, but their plant growth chamber also includes an idea for providing a source of protein for lunar astronauts. The project by students at the Atlantic County Institute of Technology in Mays Landing, N.J., uses aquaponics -- plants and fish in the same environment.

Aquaponics combines aquaculture (raising fish) with hydroponics (growing plants without soil). The system designed by the New Jersey students combines bluegill fish and plants in the same tank. The fish live in the water in the bottom of the tank. The plants grow in the top half of the tank.

The seedlings are grown in rock wool, which is a type of mineral wool used in hydroponics. The seedlings are then suspended in a plastic pipe in the top half of the tank. The water is pumped from the bottom of the tank through the pipe, then back into the tank. The roots of the plants are exposed to the water stream as it flows through the pipe. As the plants absorb the nutrients in the water, they also filter it.

"The system is a symbiotic relationship between the plant and bluegill fish," explained the students' science teacher, Melissa Hannan. "The fish provide nitrogen and phosphate for the plants, while the plants provide beneficial bacteria to convert ammonia." 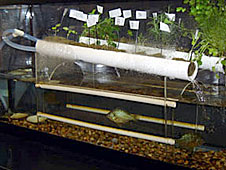 The system designed by a group of New Jersey students is an aquaponic system, which combines fish and plants in the same environment. Image Credit: Atlantic County Institute of Technology

Plants receive light from light-emitting diodes, or LEDs, under the wooden canopy on top of the tank. The lights are powered by solar panels. Reflective material on the sides and back of the tank enhances the solar-powered lighting, Hannan said.

Students researched bluegill fish, different mediums to grow seeds, and the chemical conversions taking place in the tank. They used three-dimensional design software to create a computer model of their tank design before building it.

They also experimented with the angle of the pipe and the water pressure to achieve the best results. "Our final product is quite different from our original product," Hannan said. "It was a lot of trial and error, which is exactly what science is."

Bluegill fish were chosen because of their small size and the constraints of the 45-gallon tank. However, Hannan said students are testing the same concept with freshwater bass in a 12,000-gallon tank in the school's greenhouse. In the small tank, students grew cinnamon basil seeds that had been flown on the STS-118 space shuttle mission in 2007 and distributed as part of the design challenge. In the larger greenhouse model, they are experimenting with growing herbs and lettuces. 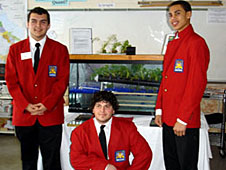 "They thought it (aquaponics) would be a good idea for the astronauts on the moon because it's a self-contained system to provide protein and vegetation," Hannan said.

Students received a second-place medal for the project in the New Jersey SkillsUSA technology competition earlier this year. Hannan said judges were impressed with the construction of the system.

"What they (students) are really taking with them is hands-on experience," Hannan said. "They're learning what it's like to start a project, hit some problems and actually solve the problem, solve the issues, and refine your system and make it (work)."