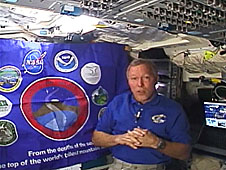 When space shuttle Endeavour launched in March of this year, a group of 35 middle and high school students in the Tampa Bay, Fla., area followed the mission closely. A few days after launch, shuttle Commander Dominic Gorie unfurled a blue banner carrying an emblem with the words, "Operation Deep Climb."

This was the moment the students had been waiting for ever since their exciting trip to Hawaii, where they probed the depths of the ocean, hiked to the summit of the mountain Mauna Kea and were joined by Gorie on an up-close tour of the Keck Observatory. The activities were part of Operation Deep Climb, one of various missions organized by SCUBAnauts International. The organization was launched by U.S. Navy Captain David Olson in 2001.

SCUBAnauts are young marine science explorers, ages 12 to 18, who take part in underwater exploration activities throughout the year. They help scientists conduct meaningful research while discovering and learning about the marine environment. 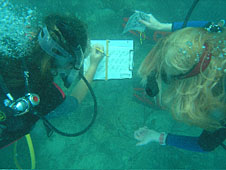 Oceans cover 70 percent of Earth's surface. They constitute the largest habitat for living things. Coral reefs, in particular, offer a pulse on the ocean's health. They support an extraordinary diversity of marine plants and animals. But human activities now threaten the survival of these vital natural resources. Pollution, climate change and over-fishing are damaging reefs worldwide.

SCUBAnauts attain firsthand knowledge of underwater environments by visiting and monitoring them, and by training with marine research scientists. "They are here to be good stewards of their environment and learn more about the environment," said marine geologist Christopher Moses, who is the chief scientist for SCUBAnauts.

The program currently exists only in the Tampa Bay area. NASA awarded a three-year grant to the program in May 2007. The grant will help continue the program's research activities and help establish new chapters in places such as the Florida Keys and Annapolis, Md.

Being a SCUBAnaut requires dedication and a sense of adventure. The first item on the agenda for new members is to get certified as open-water scuba divers. They learn diving skills such as moving forward, going backwards and turning by using just their feet. These skills are important because on research dives these young explorers carry cameras, clipboards and other equipment. 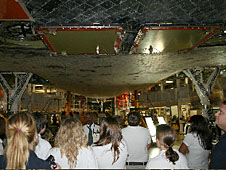 A group of SCUBAnauts stand under the space shuttle Endeavour in February 2008 while it is being prepared for a March launch. Image Credit: SCUBAnauts International

"As a scientific diver (you are) constantly working with something so your hands are always full," Moses says. "Plus you don't want (animals) to run and hide when you wave your hands."

One or two weekends a month are reserved for the exciting science dives. On these dives, SCUBAnauts monitor artificial reefs in the Tampa Bay and Gulf of Mexico. They check the health of coral reefs by watching for disease, algal overgrowth or bleaching. Routine parts of the dives also include fish counts; species surveys; and collecting and recording data that include temperature, turbidity and salinity of the waters.

The data collected is shared with NASA's GLOBE Program. GLOBE involves K-12 students from around the world in measuring environmental factors, sharing Earth science data with each other and using the data to conduct science projects and research. GLOBE supports NASA's goal of attracting and retaining students in science, technology, engineering and mathematics disciplines. 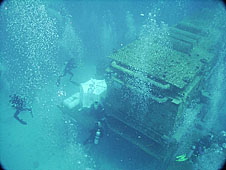 Summertime brings more thrilling adventures at exotic sites. In the past, SCUBAnauts have monitored coral reefs in the Bahamas and Jamaica. They have performed fish counts in the Florida Keys National Marine Sanctuary, which boasts over 200 species of coral and fish. And they have visited the Aquarius underwater ocean laboratory, located off the shore of Key Largo at a depth of 60 feet.

Operation Deep Climb was one of the more memorable research expeditions for the SCUBAnauts. In October 2007, the students, accompanied by researchers and adult volunteers, went to Hawaii for two weeks. They descended as far as 2,000 feet below the ocean's surface in deep-sea submersibles to look at a Japanese midget submarine sunk at Pearl Harbor.

After the Pearl Harbor dive, the SCUBAnauts climbed 13,700 feet to the peak of Mauna Kea. The hike allowed them to explore rare plant and animal species, their ecosystems, and endangered communities. Captain Gorie then escorted them on a tour of the Keck Observatory, which features twin telescopes -- each standing eight stories tall -- that sit atop the mountain.

Future missions will take the SCUBAnauts to observe undersea volcanic eruptions and hydrothermal vents, and to explore the undersea geological features along Mauna Kea, which extends 20,000 feet beneath the ocean.