Grow Text SizeShrink Text Size
Once Upon a Time, There Was a Rocket
Students from Cheyenne Mountain Charter Academy in Colorado Springs, Colo., participated in NASA's 2009 Student Launch Initiative. One of their mentors, Jeff Lane, wrote the following article about the team's experience. 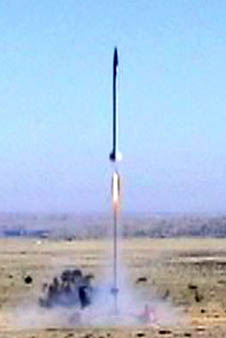 Cheyenne Mountain Charter Academy has a group of middle school and high school students who just returned from the most incredible experience of their lives. NASA's Student Launch Initiative is one of the rewards offered to teams who place among the top teams at Team America Rocketry Challenge. The students placed fifth at Team America Rocketry Challenge 2008, so they submitted a proposal that was accepted by NASA.

Nine months and hundreds of hours later, they launched a science experiment nearly a mile into the clear blue Alabama sky on top of a beautiful, 9-foot-tall, 14-pound rocket.

At NASA's Marshall Space Flight Center in Huntsville, Ala., the Cheyenne Mountain Charter Academy students toured some of NASA's leading-edge research facilities. They watched as physicists and engineers tested a rocket motor in which plasma is contained and shaped by an electromagnetic field. They were able to hold parts of the alloy shell of the Ares I rocket and examine the revolutionary "stir welding" process that will make its skin incredibly strong. They also spoke with a Russian scientist about a mock-up of the International Space Station designed to help ground-based technicians provide accurate maintenance instructions to those in space. They spent a significant amount of time inside the mock-up.

Kenneth is the Student Launch Initiative team captain and an eighth-grader at the school; his eyes blaze as he talks about the trip. "It's hard to pick, but I thought the coolest thing was the test-stand tour. A few years ago, they actually lit up Saturn V motors mounted to these things. The stands are so huge they're hard to comprehend. When they (ignited) the first Saturn V motors, they shattered windows up to 20 miles away. Please, I wanna push that red button."

The Cheyenne Mountain Charter Academy experiment was an instrumentation test. The altimeters used in Team America Rocketry Challenge and the Student Launch Initiative gave variable readings from one unit to the next, and the students were curious about the accuracy of the altimeters. An HD video recorder and a Global Positioning System unit were aboard with the altimeters. A comparison between the three instruments allowed the team to determine exactly how accurate the altimeters were. 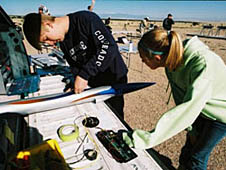 The team put the science and math they had been learning in class to practical use building and flying the rocket and analyzing the data from their experiment. They designed and flew a full-sized rocket in Rocksim (an engineering and simulation program) and built a scaled-down prototype vehicle to test stability and performance before building their final rocket.

An extremely promising aspect of the final flight is the rocket did not progress any farther than 10 feet away from the pad horizontally in any direction. As a result, the data were easier to interpret. Nate, the team's data analyst, said, "We expected to have to do precise static tests to determine the effects of perspective, and we also expected to have to apply the Pythagorean Theorem to triangulate the actual altitude, but that wasn’t necessary. It certainly made my job a lot more fun."

The team's final flight on April 14, 2009, was successful. The rocket flew straight up as planned and did a tail slide. In a tail slide, the rocket does not arc over; it actually comes to a complete stop while still pointing up, then starts back down tail first. While the team hoped for such a result, they did not expect it, because the odds against a tail slide are 300 to 1, even with careful preparation to precisely fly the rocket straight up.

One thing that went wrong was the rocket spun 4.5 times, which was unexpected since this had never happened before. A bigger problem was that the engine was missing an O-ring. Thankfully, Ernie Puckett (one of the mentors) rebuilt it correctly, which saved the team from a catastrophe at takeoff. When the engine lit, though, it became immediately obvious that the grain was a Green Gorilla motor instead of the ordered White Wolf. This, combined with a nozzle that was too small, caused the rocket to be 1,000 feet short of the mile mark.

The results show that, in the end, the Perfectflite altimeter was closest to actual altitude; the Pico altimeter, second; and the GPS in last place.

Adelaide is on the recovery, outreach and sponsorship team. "I had no idea how cool the Marshall Space Flight Center would be," Adelaide said. "There is an incredibly wide range of ongoing work, from metallurgy to waste recovery, robots, botany and propellant dynamics."

The student who commuted the farthest to participate in the activity was Tyler. "I attend The Classical Academy in North Colorado Springs, but I don't mind the trip south," Tyler said. "I love building and flying high-power rockets and was in hog heaven watching and participating in 34 big multideployment launches a mile high." His eyes get really big. "The range of experiments covered by the other high school and university teams was amazing. I learned a lot."

Warren Layfield, formerly a NASA engineer and now the education director for the Colorado Springs Rocket Society, was able to go. "In order to maximize our efficiency, we had four parents and mentors transport the SLI rocket to Alabama in a minivan. Wow, what a trip; 20 hours non-stop," Layfield said. "I'm happy to endure a little discomfort, though, because these students are our future. ...We need to generously support these teens with our time, expertise and financial support."

Jacob, a Colorado Virtual Academy student, met his hero at the launch. "My hero is Homer Hickam, who is the main character in the movie 'October Sky.' He also wrote the best-selling book 'Rocket Boys,' as well as many others. At the SLI launch, I got to shake hands with and talk to Mr. Hickam, and he was the nicest person you could imagine. I expected rocket scientists to be aloof and maybe even pretentious, but I found out they're just like me. My dream of becoming a NASA engineer or private contractor fabrication specialist just got wings."