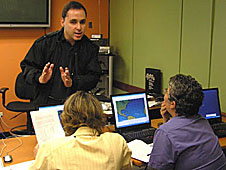 A new Earth science mapping software is helping students who are visually impaired "see" that they don't have to see to do science.

The developers of the new Earth+ software say the educational tool shows students that it is possible for them to do science using skills and senses other than eyesight. By incorporating sound elements into maps, the software helps students understand concepts including latitude, longitude and the geospatial relationship of objects on maps.

"Students have real issues with (these subjects), and those issues are only amplified if you can't see," said Laurie Cook, a former teacher and a member of the Earth+ team.

Robert Shelton leads the NASA Learning Technologies team at NASA's Johnson Space Center in developing computer programs to make mathematics and science more accessible to students who are visually impaired. Shelton, who himself is blind, said students with limited vision can easily feel like science is not for them but is only for people who can see. The Earth+ tool helps these students overcome that false impression and achieve and demonstrate the ability to conduct science.

The Earth+ team includes Shelton, Stephanie Smith and Terry Hodgson at NASA's Johnson Space Center in Houston; Laurie Cook, Susan Hoban and Daniel Laughlin with the Goddard Earth Science and Technology Center at the University of Maryland-Baltimore; and Nicolas Linares Orama, Jose "Manolo" Alvarez, Jorge Santiago and Celia Bishop with the FILIUS Institute of Disability and Rehabilitation Research at the University of Puerto Rico. 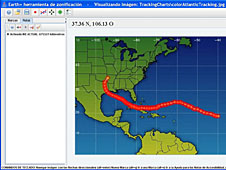 The Earth+ software is making Earth science more accessible to students who are visually impaired. In this image, the software was used to track the path of Hurricane Ike, which came ashore in Texas in September 2008. Image Credit: NASA

Earth+ is a project of NASA's Information Accessibility Lab and is funded by NASA's Science Mission Directorate. The mission of the IAL is to provide software tools to enable the development of assistive instructional software applications and enhance science, technology, engineering and mathematics education for sensory-impaired students. The project supports NASA's goal of attracting and retaining students in STEM disciplines.

Several years ago the team developed MathTrax, a Web-based, sound-enabled graphing calculator application. The software creates audio descriptions and sound so that the user can listen to data from the graph.

"Math is an issue for all students," Shelton said. "If a kid comes to a classroom and already has an issue of some kind, like blindness ... they tend to not get a lot of help that they might need in math, because math is hard. The blind kids tend to be shunted away from math and science. That was our motivation for creating MathTrax."

While MathTrax focuses on mathematics, Earth+ attempts to make Earth science -- a very visual field -- more accessible to students who are blind or visually impaired. In addition to the software, the team has created two middle school lesson plans to be used with the software.

"The lessons that you're going to find on the site are targeted toward middle school because that's where we start to lose kids in the sciences," Cook said. "Young kids are excited about science, but for some reason they lose interest at the middle school age."

Both lessons focus on hurricanes. The first assignment is to track an approaching hurricane by keying the latitude, longitude, wind speed and category level into the program. The second lesson builds on those skills and asks students to predict the hurricane's path.

"We didn't want to just build something that allows kids to 'see' the picture," Shelton said. "Lessons with tactile (textured) drawings are common and good. ... The things that 'tactile' is not very good at is being able to record your work or produce something that can he shared with others. 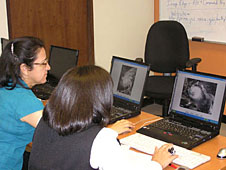 Two lesson plans, written for the Earth+ software, assign students to track an approaching hurricane by keying the latitude, longitude, wind speed and category level into the program, and then to predict the hurricane's path. Image Credit: NASA

"The best thing about the software is the kids' having a place to record their work and show what they've done."

The team has received positive feedback from both educators and students. One teacher said the software would help students be more independent in their studies. Other teachers commented that Earth+ was fun to use and would motivate students to study the sciences.

Celia Bishop with the FILIUS Institute said students in Puerto Rico were excited to be learning new things and to understand concepts they didn't understand before. Teachers responded with excitement about having a new tool to increase student interest and competency in science.

"In addition to being a program for blind students, it will also help those students who are not interested in school; it is a way to interest them," one teacher said.

Another commented, "I'm happy because I now have another work tool. I know that when I show the program to the science and history teachers we will be able to integrate its use in the classrooms. It will not only be offered to those students with special needs but will be used in an inclusive way."

At a workshop at the Maryland School for the Blind, Cook observed that students with the most severe visual disabilities were the most excited about Earth+. "It got them excited that they could participate in science even though they're impaired," she said.

Developers Terry Hodgson and Stephanie Smith agree the technology is revolutionary because there are not a lot of math and science resources for blind or low-vision students.

"Earth+ provides a way for students to participate in science investigations on an even footing with their peers," Smith said.

"Provide the right tools, and kids with blindness can do anything anyone else can do," Hodgson added.

Earth+ is available in both English and Spanish. The team hopes to receive funding to expand Earth+ and MathTrax capabilities even further. Earth+ can be downloaded from the Johnson Space Center Learning Technologies Web site.