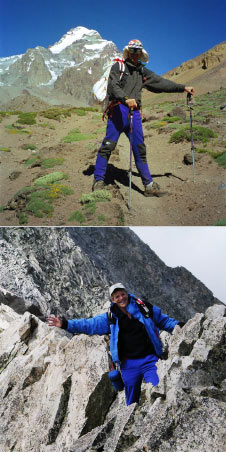 Scott Parazynski is a man with many talents. This 47-year-old NASA astronaut has been to space five times, has a doctorate of medicine from Stanford University, lived overseas most of his adolescence, is an experienced pilot, has two children, and now, he is climbing Mt. Everest.

He left Houston on March 23 for a 24-hour flight to Nepal. He stopped in Denver, Los Angeles, Bangkok and Katmandu before arriving in the Himalayas to begin a seven-day walk to the base of Mt. Everest. The rocky, hostile mountain environment will be home to Parazynski and his team for six to eight weeks as they make a slow ascent to the summit of Earth’s tallest mountain.

“I’ve flown in space five times, but I am also a mountaineer and explorer. I just love going to challenging places and seeing what’s there,” Parazynski said.

Parazynski has been planning this expedition for more than 15 years. He was originally scheduled to join an expedition to climb Mt. Everest in 1992, but his selection into the astronaut corps and subsequent space mission postponed his expedition plans until this year. He recently returned from shuttle mission STS-120 and chose to spend his vacation time and money on the climb.

Many of the challenges Parazynski is facing at Mt. Everest aren’t much different from his time in space. He said the physical and mental obstacles one has to overcome when training to be an astronaut are similar when training to climb a mountain.

“Being a climber has helped me be an astronaut. One of the best ways to prepare for a spacewalk is rock climbing. It takes a lot of strength and endurance,” he said.

Living in a harsh environment is one thing Parazynski had to train for on Earth and in space. Mt. Everest will produce “howling winds and driving snow,” but some places heat up to 100 degrees during the day and then drop below zero at night.

“You know you are in an environment that is risky. There are constant reminders that you’re in a place that humans are not meant to be in,” he said.

Being mentally prepared is also a challenge. Parazynski said whether in space or on a mountain, he always misses his home and family.

“I have a lot of admiration for those who live on the space station for months. I found that even on a two-week shuttle flight I get homesick. It will be very difficult to be away from my kids,” he said.

Parazynski said his love of climbing started at a young age, when he read books about explorers fighting their way to Mt. Everest’s peak. Some of the mountains he has already conquered include Cerro Aconcagua, which at 22,841 feet above sea level it is the tallest mountain in the world outside of Asia; and 53 of Colorado’s mountains, which peak at more than 14,000 feet.

Once Parazynski has spent weeks climbing up and down Mt. Everest to get acclimated to the high altitude, he will make his final climb to the summit, where he plans to spend 20 minutes “just taking it all in.”

Parazynski was selected by NASA in 1992, and his first mission was STS-66 in 1994. Since then he has participated in STS-86, STS-95, STS-100 and STS-120. He attended junior high school in Dakar, Senegal, Beirut and Lebanon before transferring to Athens, Greece for high school. He received a bachelor of science degree in biology from Stanford University in 1983, continuing on to graduate with honors from Stanford Medical School in 1989. He served his medical internship at the Brigham and Women’s Hospital of Harvard Medical School, and completed 22 months of a residency program in emergency medicine in Denver. Heather Nicholson
Johnson Space Center
› Back To Top