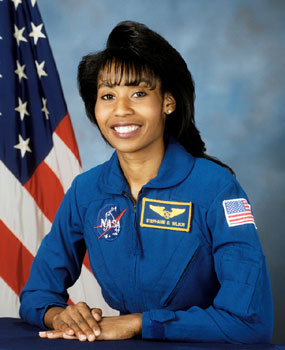 She had even made it through the selection process and been officially asked to join the astronaut corps.

But before she could, she had to learn how to swim.

“The hardest part was learning how to swim,” she said. “I couldn’t swim.”

Astronauts spend a lot of time training underwater, so during their first month in the program, they’re required to pass a swimming test. And Wilson was pretty sure she wasn’t going to be able to. So she got to work.

“Between April, when I was selected, and August, when I was supposed to start, I was basically learning to swim,” she said. “I was very lucky that the California Institute of Technology coach agreed to teach me to swim. But it was barely enough time.”

This was the only part of the process of becoming an astronaut that Wilson hadn’t prepared for. Her interest in space developed when she was 13. She interviewed an astronomer for career investigation assignment and thought the lifestyle sounded appealing.

“I thought, ‘Hey, it’d be neat to have a job where you sleep all day and stay up all night – as astronomers do – and travel around the world,’” she said. “So that was the initial interest.”

It wasn’t long, however, before Wilson began to rethink her priorities.

“When I was in high school, I started looking at careers and opportunities,” she said. “I thought that engineers basically had more opportunities. As a mechanical engineer, I could work on automobiles if the bottom fell out of aerospace. I could work building designs. I could work on city planning. I always felt like engineering was a good career move."

And on top of all that, it could also lead her to the stars.

“It was always something in the back of my mind,” she said.

So Wilson went to Harvard University for her undergraduate degree and followed it up with two years work at Martin Marietta Astronautics Group as a loads and dynamics engineer. Then it was on to the University of Texas for her master’s, which she used to land a job at NASA’s Jet Propulsion Laboratory. 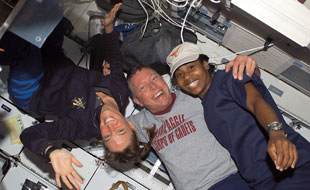 Image to left: Astronauts Lisa Nowak (left), Mike Fossum and Stephanie Wilson enjoy a light moment on the middeck of the Space Shuttle Discovery during the STS-121 mission in July 2006. Credit: NASA

Then, armed with the minimum requirements and a little extra, she started applying to the astronaut program. But she kept her expectations low.

“I had heard that it takes several applications,” she said. “You really want to get one in there, get your name down and start the process. But don’t expect to receive a positive response the first time.”

That turned out to be sound advice.

“I received a nice rejection letter,” Wilson said. “It said ‘Thank you very much for sending in your application.’ So I said, ‘OK, every two years, you send an update.’”

In the meantime, however, she wasn’t going to worry too much about it. Instead, she put all her energy into doing a good job where she was.

They did align, and it did work out. After submitting her second application, Wilson was called to Houston for an interview. A few months later, she got the call offering her the job.

It sent her running to swimming lessons. 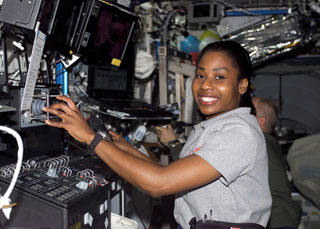 The summer she had almost wasn’t enough time.

“It was pretty close,” she said. “I just was not a strong swimmer. I passed all of the tests, but there was not much margin.”

It’s been 10 years since that summer, though, and those swimming lessons have paid off – in July, Wilson launched into space for the first time. And swimming was the furthest thing from her mind.

“When you’re at liftoff,” she said, “the only thing that you’re processing is that you’re riding a rocket – how much fun it is and how exhilarating.”
Brandi Dean
Johnson Space Center, Houston
› Back To Top