Astronaut Suni Williams: As Chance Would Have It 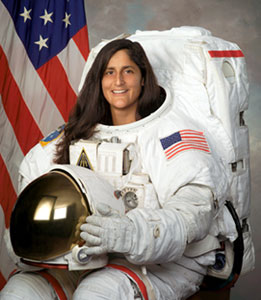 Happenstance is Suni Williams’ answer to the question of how she became an astronaut.

If she traces it back, it comes down to a choice between cutting her hair or living in New York. Cutting her hair, it turns out, was the lesser of two evils -- even if it did mean going to the Naval Academy instead of pursuing her, until then, lifelong dream of becoming a veterinarian at Columbia University.

With that decision made, everything else just kind of fell into place.

She would never have guessed, however, that what was falling into place was a career as an astronaut. Sure, as a child she thought it’d be cool. But she thought of space in terms of “The Jetsons” and “Lost in Space” – it didn’t seem like reality.

“I thought that only really, really smart people become astronauts,” she said. “I didn’t know anything about the astronaut program.”

But at the Naval Academy, one thing led to another. She wanted to be a diver, but there was only one opening for a woman diver and choices were given based on class ranking. Williams graduated somewhere in the middle of her class, and someone ahead of her in line took the spot.

So she decided on flight school instead; “Top Gun” had recently come out and the life of a jet pilot seemed alluring. But, again, there were only a couple of spots available to female jet pilots, and while Williams did all right in flight school, she wasn’t ranked high enough to get her top choice.

Which is how she ended up in helicopters.

“I went, ‘Whoo, I’ve never flown a helicopter before in my life,’” Williams said. “But I tried that out and absolutely loved it. It’s probably the second best view of the Earth.”

Williams became the test pilot for her squadron, and so went from flight school to test pilot school. And it was there that she got her first glimpse of NASA. Part of the curriculum was to come to Johnson Space Center, visit all the different buildings and hear former astronaut John Young speak. 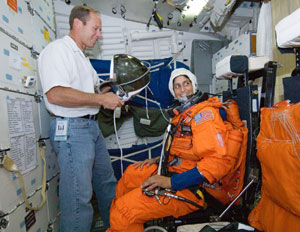 “He talked to us about landing on the moon and told us that they had to learn how to fly helicopters to do the lunar landing,” Williams said. “So that was the first time I was really like, ‘Wow – maybe if I really want to do this, I should apply. Maybe we’ll go back to the moon.’ Up until then, I never really thought it would be possible -- never really considered it.”

Considering it didn’t quite convince her it was possible, however. She knew students from the test pilot school had a history of becoming astronauts, but they were typically ranked first or second in their class at the Naval Academy. And she was neither.

“I started looking at the people who were actually at NASA, and I thought there is no way I can even keep up with any of those people,” she said. “I was struggling to get my master’s, going to school at night, and I was like, ‘I don’t want to do this. This is too painful.’ And I thought, ‘No, they’re not going to take a helicopter pilot.’ I thought for sure there was really no way.”

Still, she didn’t give up. As the daughter of an Indian immigrant who had to compete for the opportunity to go to school and a woman who earned a finance degree at night while raising three children, Williams hadn’t been taught to throw in the towel without a fight.

“My parents had always raised me to, if there’s something you want, just try for it,” she said. “Or else you’re cutting yourself off. Just do it. Go for it.”

And she was turned down.

“I put my first application in, and I didn’t get an interview – just sort of got the rejection letter,” Williams said.

That, she said, was the hardest part of the road to becoming an astronaut. She didn’t let it stop her from applying again, but she tried to better prepare herself for the disappointment the second time around. 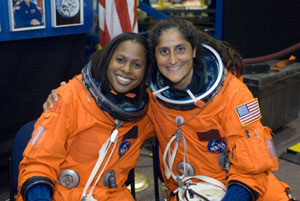 “I thought, ‘Let’s not think this could even happen,'” Williams said. “That’s the hardest part, when you tell yourself it’s not going to happen – move on, it’s going to be OK, you’ll have other things in your life.”

Image to right: Suni Williams (right) and STS-116 Mission Specialist Joan Higginbotham, attired in training versions of the shuttle launch and entry suit, pose for a photo as they await the start of an emergency egress training session. Photo credit: NASA

She accepted orders to go to Italy for her next tour in the Navy and was preparing to move when NASA called. It turned out to be well worth the original disappointment, Williams said. She’s now preparing to spend six months aboard the International Space Station.

She can hardly believe her good luck. And others have an even harder time believing it. People accuse her of kidding around when she lists her occupation as astronaut, and she doesn’t blame them. She is, after all, just a regular person.

“I think I’m pretty happy with that reaction, because I hope to come across as someone people can just talk to,” Williams said. “I get a big kick out of people when they say, ‘I don’t believe you.’ I say, ‘Yeah, well, it’s true.’”
Brandi Dean
Johnson Space Center, Houston