America needs YOU at the frontiers of space and technology!

NASA is now accepting applications for its 2009 astronaut class. The agency is looking for a few men and women who want to fulfill their dreams and be a part of the next generation of explorers. 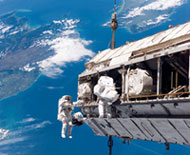 The open positions are for astronaut candidates to train for tours of duty on the International Space Station, the largest human spacecraft ever built. It is also the site for research that will prepare NASA for future long-duration human missions to the moon and other destinations. The Constellation Program is responsible for building and operating the next-generation vehicles that will carry astronauts to the space station and the moon.

Applicants must meet physical standards and educational requirements, which include a bachelor’s degree in engineering, math or science and at least three years of experience in one of these fields. Teaching experience, including experience at the K-12 level, is considered to be qualifying experience; therefore, educators are encouraged to apply.

The open positions require extensive travel on Earth and in space. Possible destinations may include, but are not limited to, Texas, Florida, California, Russia, Kazakhstan, the International Space Station and the moon. 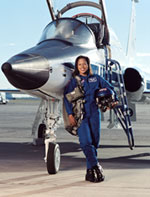 Image to left: Astronaut Joan Higginbotham takes a break from training to pose for a portrait with a NASA T-38 trainer jet. Image credit: NASA

Astronauts are responsible for technical duties and training at NASA when they are not training for a specific flight or conducting a mission. The duties can include scientific research, mission control communication with on-orbit crews, robotic training, spacewalk training, aircraft operations, technical design and engineering, and wilderness training.

All U.S. citizens, both civilian and military, who are qualified and super-motivated can apply for these positions. Women and minorities are encouraged to apply. The deadline is July 1, 2008.

NASA HAS SPACE FOR YOU!

Astronaut Selection and Training
Become an astronaut yourself.
+ Read more

USAJOBS is the official job site of the United States Federal Government.
+ Apply