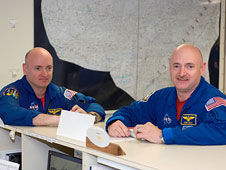 Growing up in West Orange, N.J., twin brothers Mark and Scott Kelly were very close and they shared a lot. They were co-captains on their high school swim team, had the same AP Biology class, and worked at some of the same jobs. Now, the two astronauts will share a different "space" as they are scheduled to meet early next year and become the first siblings to be in space together.

"It's something that I think we both consider would be really neat if it happened, but having the privilege of flying in space, without flying together is just an incredible opportunity and I always thought it'd be great if it happened," Scott said.

Scott will launch to the International Space Station aboard a Russian Soyuz spacecraft from the Baikonur Cosmodrome in Kazakhstan on Oct. 7. (Oct. 8. local time). Mark will command the last scheduled space shuttle flight, STS-134, in February 2011. If the launch schedule holds, the pair will be working together in orbit for eight days before the shuttle undocks and returns to Earth.

With all their similarities, like most siblings, they had their differences too. Scott was a Mets fan and Mark liked the Yankees. Often, the sibling rivalry didn't stop at sports. 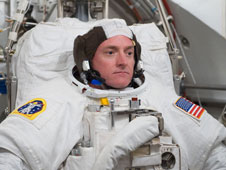 "Pretty much every day we would get into fist fights, so it was tough for my mom. She'd try to break 'em up, then some of the fights would last hours and hours," Mark said.

After graduating from Mountain High School in 1982, Mark and Scott took on somewhat different paths. Scott went to the State University of New York Maritime College, and Mark to the U.S. Merchant Marine Academy. Both became U.S. Navy captains and later came back together as a part of the same Test Pilot School class. Following Test Pilot School, Mark and Scott both applied for the astronaut program. In 1996, they were selected in the same Astronaut Corps class. 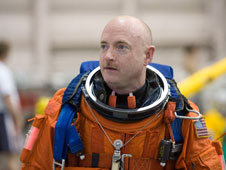 "It's going to be a lot of fun, but these missions are really complicated. All of us have to work together," Mark said. "To make sure this thing gets executed correctly with nobody getting hurt and everything getting accomplished."

Mark will be delivering supplies and the Alpha Magnetic Spectrometer (AMS) to the station. AMS is a device to study the universe's origin by searching for the antimatter, dark matter, strange matter and measuring cosmic rays. Scott will serve as the flight engineer for Expedition 25 and commander for Expedition 26 during his six-month-long mission aboard the complex.

When the twins meet in space next year they will make history as the station opens for shuttle a final time. Follow Mark and Scott on Twitter as they share their experience in space together and show there is no limit to where family ties can reach - Mark at http://twitter.com/shuttlecdrkelly and Scott at http://twitter.com/stationcdrkelly.
Ashle' Robinson
NASA's Lyndon B. Johnson Space Center
› Back To Top