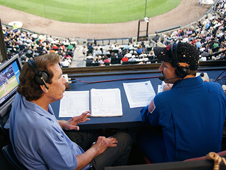 In the early morning hours of a balmy summer day, NASA astronaut John Grunsfeld arrived at the first of several media interviews on his two-day tour of Chicago. Grunsfeld’s trip to the Windy City was a part of NASA’s 2009 Hometown Heroes campaign. Throughout the summer, several astronauts will travel to their home regions to throw out the first pitch at Major League Baseball games as part of NASA’s celebration of the International Space Station’s 10th year in orbit.

The trip kicked off with live television interviews at local network affiliates, ABC and CBS. At ABC, Grunsfeld was asked his opinion about the importance of education.

“I think that kids are our future and it’s so important that they stick with science, math and technology, and that they understand the role of all of that in the modern world,” Grunsfeld said.

After talking about the benefits of space exploration with the morning show hosts, it was off to WGN Radio to speak with nationally known talk show host Greg Jarrett. Jarrett hosted Grunsfeld on the show for the entire 7 a.m. hour. He praised Grunsfeld for his impressive career and asked him about his next steps.

“I’m hoping to get to travel to the International Space Station and live in space for six months.” Grunsfeld said. “The ISS is the most incredible engineering feat ever done by humans in space and it would be great to live up there and do science experiments that can help us here on earth.” 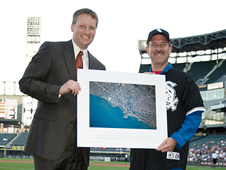 NASA astronaut Dr. John Grunsfeld presents a photo of Chicago from space to management at the White Sox game during the 2009 Hometown Heroes campaign in Chicago. Photo Credit: NASA

Following the media interviews, Grunsfeld met with Bill Mullen, a two-time Pulitzer Prize winning author and a Chicago Tribune veteran of more than 40 years. Mullen shadowed Grunsfeld during his visit to gather information for a magazine feature about his career and life growing up in the Chicago area.

Later that afternoon, it was on to the Museum of Science and Industry. The appearance included presentations to museum VIPs and a sold out crowd in the museum’s main auditorium. After an hour long autograph session, Grunsfeld wrapped up the day’s activities with a 30 minute podcast interview for the museum’s Web site.

The next day, the Adler Planetarium, which was designed by Grunsfeld’s grandfather, hosted him for the entire afternoon. Grunsfeld spoke to the students of the Astro Science Workshop (ASW). ASW is a summer program for teens with a strong interest in astronomy and was where Grunsfeld fostered his love of the subject when he was in high school.

Following his time with the ASW students, it was off to the auditorium to speak to a packed house. At the end of the lecture, Grunsfeld presented a 200-year-old telescope that he flew for the museum on STS-125 to the Adler’s president and signed autographs for guests.

“We are so happy to have John visit us,” said Sarah Beck, Manager of Public Relations for the Adler Planetarium. “Our visitors loved his presentation and were so excited to meet him during the autograph session.” 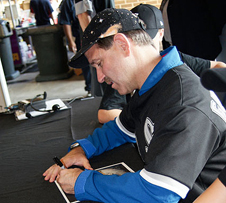 That evening it was on to “Sox ‘n Space Night” at U.S. Cellular field, home of the Chicago White Sox. As his proud wife and two children watched from behind home plate, Grunsfeld took to the pitcher’s mound and threw out the first pitch of the game. He went on to sign autographs for fans and spent some time on air with Ed Farmer and Darrin Jackson of White Sox radio.

“We were honored to have Dr. Grunsfeld visit U.S. Cellular Field,” said Amy Sheridan, Director of Game Operations for the White Sox. “It’s always a pleasure to recognize accomplished White Sox fans like Dr. Grunsfeld, and his presence at the ballpark made our “Sox ‘n Space Night” a memorable and successful event.”