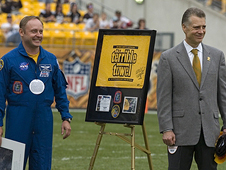 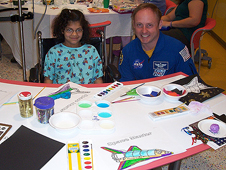 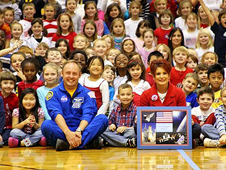 Image above: Astronaut Mike Fincke shared his experiences on Expedition 18 with over 700 students at Avonworth Elementary School, encouraging them to study science, technology, engineering, and math. Photo credit: NASA 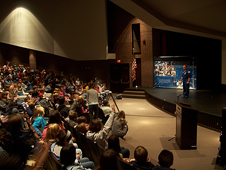 Astronaut and U.S. Air Force Colonel Mike Fincke has taken the NFL’s Pittsburgh Steelers to new heights! During his command of Expedition 18 onboard the International Space Station, Fincke flew the iconic “Terrible Towel” for his favorite team and sent a message to them for their 2009 Super Bowl game.

His unique Terrible Towel wave in zero gravity became an internet sensation and inspired Steelers fans around the world. This November, Fincke attended his first Steelers game when his special team took on the Cincinatti Bengals at Heinz Field on Sunday, Nov. 15. The Hometown Heroes weekend peaked as the Steelers honored Fincke during their second largest crowd in the stadium’s history.

Prior to the game, Fincke met fans to sign autographs and take photos. During the pregame activities, Fincke presented the famous Terrible Towel that was flown in space to Steelers President Art Rooney II. Fans responded with a standing ovation when the video footage from space with the towel was shown on the stadium scoreboard. Rooney then surprised Fincke by presenting NASA with a #18 Steelers jersey in honor of his Expedition.

His visit actually began on Friday, Nov. 13, with a series of media interviews and educational appearances. Fincke, an Emsworth, PA native, visited his alma mater, Sewickely Academy, where he attended on scholarship while growing up. He met with more than 400 students, shared his experiences on Expedition 18 and encouraged the students to pursue their dreams.

Later that afternoon, Fincke spoke with more than a thousand students in the Avonworth School District. The students and faculty were thrilled to have Fincke share his inspirational story and information about space exploration.

“It’s great for the students to hear someone with real-life experience, especially from the perspective of living and working in space,” said Darlene Tartaglione, Principal of Avonworth Elementary. “It’s very nice to see that what the kids are learning really can be applied to life outside of school.”

Hometown Heroes is an opportunity for astronauts to reach out to their communities. Fincke also spent Saturday morning with patients at the Children’s Hospital of Pittsburgh. When he arrived, the staff and children had been working on space activities. Fincke quickly introduced himself and presented the hospital with a photo of Pittsburgh that he took from the space station. It was not too long before he joined the children in their activities, helping with arts and crafts and signing autographs.

Fincke continued his community activities with a presentation at the Carnegie Science Center on Saturday afternoon. He shared his experiences on the space station and took questions from the audience of more than 300 people, some of whom had interacted with him during Expedition 18. David Trombetta, a high school student from the Pittsburgh area was part of a group of students who spoke with Fincke over ham radio during the mission.

“They are trying to advance science to better understand life away from Earth,” Trombetta said, excited to meet an astronaut in person for the first time. When asked if he aspired to travel in space, he said, “No, but I would like to be an engineer.”

Fincke has spent a full year in space throughout the course of his career as a NASA astronaut. As a mission specialist on the upcoming STS-134 space shuttle flight, Fincke will add 12 days to his cumulative time in space. The mission will mark the final flight of the space shuttle Endeavour. It is scheduled to be the second to last flight of the Space Shuttle Program.