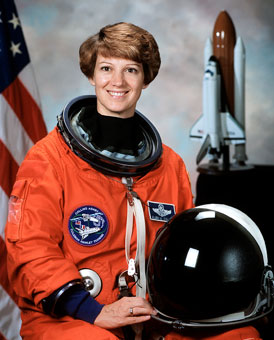 An astronaut’s work, it seems, is never done.

Eileen Collins retired in May, but by October she still hadn’t found time to finish cleaning out her office.

Of course, that statement could also apply to the past three decades of Collins’ life. In 1976, when Collins was a college sophomore, the Air Force announced it would begin training women as pilots. NASA followed suit in 1978 and began accepting women into the shuttle program – just about the time Collins was deciding what to do with her life.

“Those were important years for me,” she said. “When the astronaut program opened up to women, that was a huge motivation for me to get my career on the course where I could become a shuttle astronaut someday. And because I was so interested in flying, I wanted to be a shuttle pilot.”

Not that it necessarily would have stopped her if the agencies hadn’t started accepting women. Collins started planning to become an astronaut long before she would technically have been allowed to. In fourth grade she read a Junior Scholastic Magazine article on the pros and cons of spending money on the space program. Even at the tender age of 8, she couldn’t imagine how anyone could think there were cons. 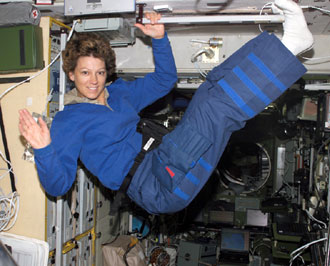 “I read both pro and con, and it made sense to me that our country should invest in space,” she said. “I couldn’t understand why anyone wouldn’t feel that way.”

That’s how she caught the space bug. From there, Collins started reading anything she could find on space and airplanes and especially astronauts. And it didn’t faze her that there were no women among them.

“I’m not sure why,” she said. “I’m not going to try to analyze it. I just figured there were only men, but I still wanted to do it. And I didn’t think there’d be any reason that a woman couldn’t do it. Maybe I was thinking that women just hadn’t asked.”

Still, Collins knew her goal was unusual for a woman – at the time most women stayed home and brought up children. There were plenty of women nurses and teachers, but few engineers or military officers. So she decided not to advertise her plan.

“I never told anybody I wanted to be an astronaut or pilot,” she said. “I consciously never talked about it because I knew people would say, ‘You can’t do that.’ And I didn’t want to hear it. I just didn’t want to fight it – it wasn’t worth it. Even when I started my flying lessons – and this would have been when I was between my junior and senior year in college – I didn’t tell my friends. I don’t think I even told my parents.”

Instead she saved up the $1,000 she needed for a pilot’s license, drove down to the airport and asked where they taught people how to fly. A year later she was in the Air Force training to be a pilot. Hers was the first class at Vance Air Force Base to include women, and it became her first “first woman to …” experience. She compared it to living in a fishbowl. 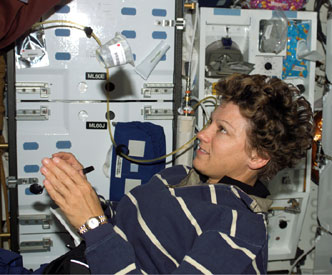 “Even though women went through pilot training at other bases in 1976 and 1977, we were the first ones at our base,” Collins said. “So I got used to this, ‘OK, here’s the women. Let’s do the interviews, get all that stuff out of the way. OK, now it’s time to train.’ You’ve got to work on training, but yet you still live in a fishbowl because everybody’s asking, ‘How’d the women do on the check rides?’ We were a test program.”

So when she became the first woman pilot in the space shuttle program 11 years later, she was expecting more of the same. She was pleasantly surprised.

“I think there was a little bit of that here at NASA, but not much because of the women that went through as mission specialists before me,” she said. “They all did very well. I mean, they were superior in the work they did. So when I came here as a woman pilot, it was much easier for me to just fit right in.”

By the time she became the first woman space shuttle commander 20 years later, being a woman wasn’t an issue at all. That’s not to say, however, that there weren’t challenges.

“My experience has been different than the men’s not in the office, only at home,” Collins said. “Because when I come home, I’m clearly a mom. My husband does a lot of things around the house, but he does the traditional male stuff, and I do the traditional female stuff. The kids bring their backpacks home from school and I go through them and make sure all the notes from the teachers are done. I make sure they’re signed up for their activities and have a way to get there.”

Like many working mothers, Collins said that the balancing act that required was the hardest part of her job. When she was training for a mission, it might mean putting the children to bed at 8:30 p.m. and then sitting down at the computer for another three hours of work. And the last mission she flew kept her away from home for five weeks because the launch was delayed. 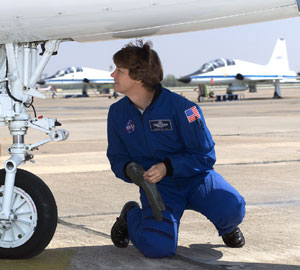 “But it was manageable,” she said. “And the mission is eventually going to fly. I would say there’s a lot of people in professional jobs around this city, around the country, that spend more time away from their families than I ever did as an astronaut.”

Which is why Collins said she is confused by the lack of women lining up to take her place. The second woman shuttle commander, Pam Melroy, is scheduled to go up in 2007, but she’s the only woman pilot still in the program.

“We haven’t hired any women pilots since 1995, and I’m wondering where they are,” Collins said. “I know there are qualified women out there who would love to do this job, and I encourage them to look at this job and to realize that I have had an extremely rewarding career with a lot of flexibility. I’m married. I’ve had two children while I was in the astronaut office. In the 16 years I was here, I’ve flown four missions and had two children, and I’ve been able to do that without too much heartache.”
Brandi Dean
Johnson Space Center, Houston
› Back To Top