Astronaut job: Icing on the Cake
Becoming an astronaut is hard – a lot harder than Danny Olivas ever thought it would be. But hard in a good way.

“It’s hard in the way like making your favorite cake,” Olivas said. “It takes a long time, you have the ingredients all over the place and you have to clean up afterwards. But the reward justifies all the effort.” 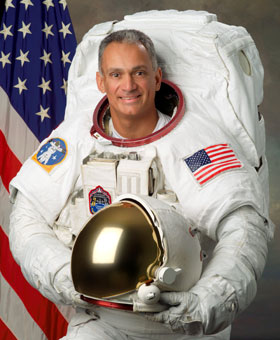 It took Olivas nine years of applying to the astronaut program before he was accepted, and if you’d told him at the beginning of the process what he’d do in those nine years – how many technical papers he would write and experiments he would conduct along the way – he would have said you were crazy.

But somehow he did it.

“It’s like anything else,” he says now. “You don’t think about it from the standpoint of the endgame. You say, OK, what do I need to do next? You eat an elephant one bite at a time. That’s what it takes. You just figure out where you want to go and what you want to do, and you take it one step at a time.”

Olivas took his first step early. He started applying to the program before he had even finished his undergraduate degree, even though the qualifications require that you have a degree and at least three years of experience.

“Obviously I was highly unqualified for the job, but I wanted NASA to know that I was interested,” he said. “You do stupid things as a kid.”

To be fair, though, he held off longer than he might have. Olivas had been waiting to apply since he visited a museum at Johnson Space Center on a family trip when he was 7 years old. As they were getting ready to leave, his father called him over to a mock-up of a rocket engine and began explaining some of the parts. Olivas suddenly realized that his father – who at one point had worked as a machinist in California – knew the parts because he used to make some of them.

“I remember thinking, ‘Wow, that’s very cool,’” Olivas said. “Then, as I looked around, I saw how many parts there were on that piece of hardware, and I realized that there were a lot of other dads and moms that were in there, also. For me, that was the first time I thought to myself, ‘It must be neat to be part of something so big.’”

So he added ‘astronaut’ to his list of things he wanted to be when he grew up – right next to ‘professional football player.’ But while his pro-ball aspirations faded over the years, he didn’t grow out of wanting to be part of the space program.

On the other hand, he was pretty sure he wasn’t smart enough for the job. Not that he was going to let that stop him.

“This sounds really strange, but I’ve always thought to myself, ‘I’m good with my hands, I can fix things,’” Olivas said. “‘I’m mechanically inclined, and maybe I’ll never be as smart as astronauts but they’re always going to need someone to fix stuff. I could be one of those guys who fix things for the astronauts.’” 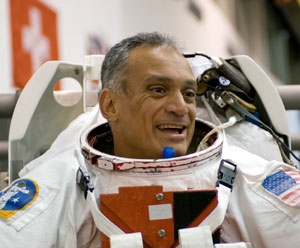 Image to left: Astronaut John D. (Danny) Olivas, STS-117 mission specialist, attired in a training version of the Extravehicular Mobility Unit (EMU) spacesuit, is about to begin a training session in the waters of the Neutral Buoyancy Laboratory (NBL) near the Johnson Space Center. Credit: NASA

And on his ninth application, he was accepted.

“At the end of the road, when I was finally brought in for an interview, I turned around and looked back and saw the things that I’d accomplished along the way,” Olivas said. “I never set out to accomplish them, it just happened.”

Now he’s training to perform spacewalks on the next shuttle mission. It turns out the people who fix things for astronauts are astronauts, a circumstance that he still finds thrilling.

“I always envisioned that once I got into the office, then things would change, things would be different,” he said. “But I haven’t changed. I still love what I loved to do. I still try and contribute in any way I can. I don’t know. I’ll always see myself as being an engineer and a scientist.”

This job just has a few perks that he wouldn’t have found in most.