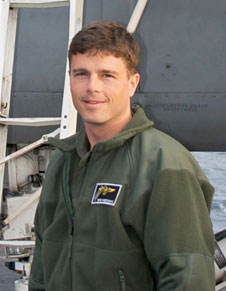 I am not sure there was a definitive moment. I grew up watching Space Shuttle launches on television and my parents took me to see the Blue Angels perform at Annapolis each spring. These two amazing displays of aviation certainly provided me with the motivation to pursue this path. When I saw my first Space Shuttle launch from the side of a road in Cocoa Beach in 2001, my ambition was sealed. There is nothing more exhilarating than watching the most complex machine on Earth accelerating downrange.

Honestly, I was inspired as a child by the loss of Challenger. That moment is etched in my mind as I am sure it is for many Americans. I never imagined I would get to compete for a spot in the space program but I always chose the path in life that would keep the dream a possibility. I maintained a strong educational focus on engineering during college and my career. After my first tour flying F-14s in the Navy, I knew I wanted to be a test pilot; my desire to fly with NASA certainly pushed me in that direction.

Complete disbelief. It still hasn't sunk in. During my two rounds of interviews, I always felt like I didn't belong among the interviewees -- everyone had far more amazing backgrounds and stories than I had. It was great to be among a group of people so thoroughly motivated to follow their dreams. I suppose when I fly home from my current deployment in a few weeks, the emotion will finally set in. For now though, the Navy is keeping me extremely busy.

Since I have spent the last five months at sea, my hobbies have been greatly reduced. I have always loved golf, education, woodworking and running. Now that I have two daughters, they have become the central focus in my life; there is nothing finer than being a dad.
› Back To Top