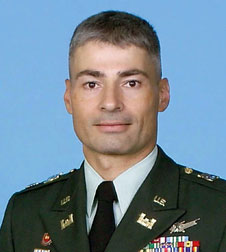 I first became excited about the idea of becoming an astronaut in the early 90s, when my company commander gave me a copy of the notice that the Army was looking for applicants. Even though I met the minimum requirements at that time, I quickly realized that I’d need more education to be competitive. By the time I had the education, I thought it wasn’t realistic to even dream about becoming an astronaut. Then three years ago, I started working at NASA’s Johnson Space Center, in the astronaut office and Houston’s Mission Control Center. For the first time, I started daring to think it might be possible to become an astronaut. Even though the odds were slim, I had to try.

Initially, I saw being an astronaut as having a job with exciting physical and mental challenges. To me that means fun and satisfying work. I still feel that way, but now the idea of contributing to human exploration and our understanding of the universe in which we live is even more appealing. There are a huge number of folks outside the astronaut corps that are involved in that work, but becoming an astronaut makes me available to do whatever NASA needs me to do most. Of course, I hope that includes flying in space some day, but there is a lot of work to be done before then. The international nature of space exploration is also very inspiring to me as well as being able to continue to work with the folks at Johnson Space Center.

Since until recently I hadn’t seriously considered that I could ever become an astronaut, my steps to get here weren’t very deliberate. I suppose I’ve been successful by looking for opportunities to do things I enjoy, yet being mature enough to appreciate how fortunate I am, even when in a miserable situation. I’ve also tried to show gratitude for the tremendous opportunities I’ve been given by working hard to make the most of them. Staying fit is something I value and the Army has given me plenty of opportunities to push my limits. The Army also helped me meet my goal of getting a masters degree and teaching. Any time that I’ve been in a foreign country, I’ve worked at learning the local language, as much as a sign of respect for the country as wanting to be able to function better. Here at NASA, being SCUBA certified helped me better prepare to support space walks as a spacecraft communicator.

I was stunned. I had tried hard not to ever get emotionally attached to the idea that this might actually work. Every now and then I’d catch myself getting excited about the possibility, and quickly try to refocus on how fortunate I had been to even get the first interview, let alone ever work at NASA for a day. Actually getting selected wasn’t something for which I had mentally prepared. Since I was working in the Mission Control Center at the time, I sent my wife a quick text message to share the news and got back to work.

Any outdoor activities that involve self powered transit or exploring, such as bicycling, backpacking, canoeing, diving, and windsurfing, especially when I can do them with my wife and children. I enjoy practicing the penny whistle as well as learning new languages.
› Back To Top