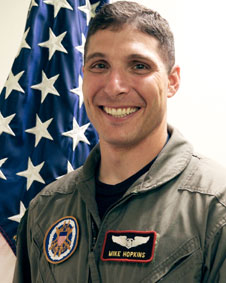 In high school during my junior year.

I was inspired by watching the early successes of the Space Shuttle program during my time in high school. I pursued aerospace engineering degrees from the University of Illinois and Stanford, completed my private pilot's license, learned how to scuba dive, attended the USAF Test Pilot School as a flight test engineer, tried to do the best job I could throughout my career, and applied, applied, applied.

I had just come back from a meeting in the Pentagon and I had a message at work to call Col. Steve Lindsey or Peggy Whitson. As soon as I heard the voice mail, my stomach started doing somersaults because I didn't know whether I had been selected or not. I had to walk around for a few minutes and prepare myself before I returned the call. This was the moment that I had been working toward since high school and it was hard to believe it had arrived. I called Col. Lindsey and when he asked if I wanted to change jobs and move to Houston, I was flooded with emotions: overwhelmed, shocked, thrilled, excited, humbled and thankful. My next reaction was that I needed to call my wife, who has been my biggest supporter as I've pursued this lifelong dream.

My “extracurricular activities” are raising two sons. Sports I enjoy include football, hockey, weight lifting and running. Other interests include reading, hiking, camping, outdoor activities and home renovations.
› Back To Top