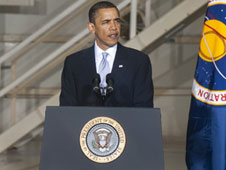 Astronauts will soar spaceward in commercial spacecraft while NASA develops technology so humans can venture to Mars and out into the solar system, President Barack Obama told a space conference Thursday at NASA's Kennedy Space Center in Florida.

Laying out his plans, President Obama committed NASA to a series of development milestones he said would lead to new spacecraft for astronauts to ride to the International Space Station, a modified Orion capsule developed as an emergency return spacecraft, and a powerful new rocket. He also promised a host of new technologies that would protect space travelers from radiation and other unique hazards.

"Early in the next decade, a set of crewed flights will test and prove the systems required for exploration beyond low Earth orbit," the president said. "And by 2025, we expect new spacecraft designed for long journeys to allow us to begin the first-ever crewed missions beyond the moon into deep space. We’ll start by sending astronauts to an asteroid for the first time in history. By the mid-2030s, I believe we can send humans to orbit Mars and return them safely to Earth. And a landing on Mars will follow. And I expect to be around to see it."

The president spoke to 200 senior officials, space and industry leaders, and academic experts inside the Operations and Checkout Building at Kennedy in the same area that was used to process Apollo spacecraft for the missions to the moon in the 1960s and 70s.

Standing in front of one of the space shuttle main engines that launched former U.S. Senator and astronaut John Glenn into orbit, President Obama said, "It was from here that men and women, propelled by sheer nerve and talent, set about pushing the boundaries of humanity's reach.

The president's fiscal year 2011 budget proposal increases NASA's budget by $6 billion throughout the next five years to fund the plans.

Noting "the sense that folks in Washington -- driven less by vision than by politics -- have for years neglected NASA’s mission and undermined the work of the professionals who fulfill it," the president said the budget increase changes that.

The president's address comes at a critical juncture for NASA because the space shuttle fleet is scheduled to be retired after three more missions. The president said it will be quicker and less costly to let private companies develop new spacecraft for astronauts rather than continue with NASA's Constellation Program, which was deemed too expensive and behind schedule.

"Pursuing this new strategy will require that we revise the old strategy. In part, this is because the old strategy -- including the Constellation Program -- was not fulfilling its promise in many ways," the president said. "That’s not just my assessment; that’s also the assessment of a panel of respected non-partisan experts charged with looking at these issues closely."

The outline does not do away with all the research and development from Constellation . Noting the success of the agency's development of the Orion crew capsule, Obama called on NASA to develop a version of that spacecraft so it can be launched without a crew to the International Space Station. It will be based there as an emergency craft for astronauts living on the orbiting laboratory.

The speech kicked off the Conference on the American Space Program for the 21st Century.

Norm Augustine, chairman of the blue-ribbon panel called the Review of U.S. Human Space Flight Plans Committee, that evaluated Constellation and came up with the "flexible path" option, endorsed the presidential strategy as the conference got under way.

Saying NASA is largely "trapped" in low Earth orbit, Augustine said industry, with NASA's guidance, can do its part for the plan.

The president acknowledged the need to get the decision right.

"Now, the challenges facing our space program are different, and our imperatives for this program are different than in decades past," the president said. "But while the measure of our achievements has changed a great deal over the past fifty years, what we do -- or fail to do -- in seeking new frontiers is no less consequential for our future in space and here on Earth."

The plan, the president said, would free NASA's designers and engineers to develop spacecraft, large rockets and new technologies that can extend the frontier of human space exploration to asteroids and even Mars.

About $3.1 billion of the additional funding would go into research and development for a heavy-lift rocket. A design for a large booster would be chosen in 2015 with the goal of launching the spacecraft a few years later. The bigger rocket could be used to loft payloads too large for most boosters, including giant fuel depots that would be parked in distant orbits so spacecraft could refuel on their way to asteroids, the moons of Mars and eventually Mars itself.

"My plan will add more than 2,500 jobs along the Space Coast in the next two years compared to the plan under the previous administration," he said. "I’m proposing a $40 million initiative led by a high-level team from the White House, NASA, and other agencies to develop a plan for regional economic growth and job creation. And I expect this plan to reach my desk by Aug. 15. It’s an effort that will help prepare this already skilled work force for new opportunities in the space industry and beyond."

Taken together, the space strategy proves America is poised for a future as bright as its remarkable past, the president said.

"Fifty years after the creation of NASA, our goal is no longer just a destination to reach," Obama said. "Our goal is the capacity for people to work and learn, and operate and live safely beyond the Earth for extended periods of time, ultimately in ways that are more sustainable and even indefinite. And in fulfilling this task, we will not only extend humanity’s reach in space -- we will strengthen America’s leadership here on Earth."