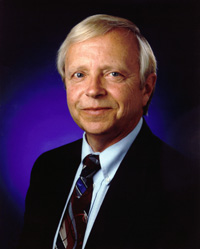 Dr. Edward J. Weiler was named Associate Administrator of the Science Mission Directorate at NASA Headquarters in Washington, D.C. in May 2008. He was previously Center Director of NASA's Goddard Space Flight Center in Greenbelt. Md., a position he held since August 2004. Prior to that, he served as the Associate Administrator for NASA's Space Science Enterprise since 1998. Under his leadership, the Enterprise had numerous successes, including the Chandra Observatory, NEAR, MAP, FUSE, Spitzer, Mars Odyssey, and Mars Exploration Rover missions. The successes realized under Dr. Weiler's leadership have earned consistent support from the Administration and Congress and have secured an unprecedented level of funding to continue such important space science missions.

According to Science News' annual metric of contributions to world discoveries and technological achievement, NASA Space Science's contribution is consistently high, garnering 5-8% of the total each year. Sharing the excitement of these scientific discoveries is an important part of Dr. Weiler's philosophy, and the Space Science Enterprise’s interaction and partnership with the academic community and the informal education community (e.g., planetaria, museums) has grown exponentially in recent years.

Prior to his 1998 appointment as Associate Administrator, Dr. Weiler served as the Director of the Astronomical Search for Origins Program at NASA Headquarters. He also served as the Chief Scientist for the Hubble Space Telescope from 1979 until 1998. Dr. Weiler joined NASA Headquarters in 1978 as a staff scientist and was promoted to the Chief of the Ultraviolet/Visible and Gravitational Astrophysics Division in 1979.

Prior to joining NASA, he was a member of the Princeton University research staff. He joined Princeton in 1976 and was based at Goddard as the director of science operations of the Orbiting Astronomical Observatory-3 (COPERNICUS).

Dr. Weiler received his Ph.D. in astrophysics from Northwestern University in 1976. He has published numerous papers in scientific journals. In his role as the Hubble Space Telescope Chief Scientist, he acted as the prime scientific spokesperson for the program and has appeared on a number of national TV programs including NIGHTLINE, TODAY, GOOD MORNING AMERICA, 60 MINUTES, etc. He also is routinely requested as a keynote speaker for a variety of professional and public events.

›  Watch Video of Dr. Weiler with an Inspired Science Student