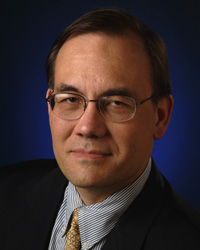 Scott Pace is the Associate Administrator for Program Analysis and Evaluation at NASA. In this capacity, he is responsible for providing objective studies and analyses in support of policy, program, and budget decisions by the NASA Administrator. He previously served as Chief Technologist for Space Communications in NASA's Office of Space Operations where he was responsible for advising senior NASA management on issues related to space-based information systems. He participated in the negotiations that resulted in the 2004 GPS-Galileo Agreement between the United States and the European Commission. Pace also previously served as the Deputy Chief of Staff to NASA Administrator Sean O'Keefe. His primary areas of responsibility included oversight of the President's Management Agenda in Human Capital, Competitive Sourcing, Expanding e-Government, Financial Management, and Integrating Budget and Performance.

Prior to NASA, Pace was the Assistant Director for Space and Aeronautics in the White House Office of Science and Technology Policy (OSTP). There he was responsible for space and aviation-related issues and coordination of civil and commercial space issues through the Space Policy Coordinating Committee of the National Security Council. Pace served on the Bush-Cheney Transition Team for NASA and the National Science Foundation.

Prior to his White House appointment, Pace worked for the RAND Corporation's Science and Technology Policy Institute (STPI) – a federally funded research and development center for the Office of Science and Technology Policy. In addition to his extensive research into space policy, technology policy, and international competitiveness at RAND, Pace also was a key member of a successful international effort to preserve radio navigation satellite spectrum at the 1997 World Radiocommunication Conference (WRC-97) and the addition of new spectrum for satellite navigation at WRC-2000. He also was a member of the Department of Defense Senior Review Group on Commercial Remote Sensing and the National Research Council's Committee on Earth Sciences.

From 1990 to 1993, Pace served as the Deputy Director and Acting Director of the Office of Space Commerce (OSC), in the Office of the Deputy Secretary of the Department of Commerce. Among his many responsibilities at OSC, Pace coordinated space policy issues across the Department and participated in efforts affecting export controls for space technologies; space trade negotiations with Japan, Russia, China, and Europe; the licensing process for private remote sensing systems; missile proliferation; and the U.S. space industrial base.

Pace received a bachelor of science degree in physics from Harvey Mudd College in 1980; master of science degrees in aeronautics and astronautics and technology and policy from the Massachusetts Institute of Technology in 1982; and a doctorate in policy analysis from the RAND Graduate School in 1989. His dissertation was entitled "U.S. Access to Space: Launch Vehicle Choices for 1990-2010."