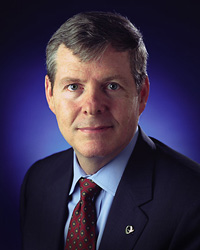 EDUCATION: Graduated from Twentynine Palms High School, Twentynine Palms, California, in 1964; received a Bachelor of Science degree in Engineering from the United States Naval Academy in 1968 and a Master of Science degree in Aeronautical Systems from the University of West Florida in 1970. He graduated from the Naval Safety School at the Naval Postgraduate School, Monterey, California in 1972 and from the Naval Test Pilot School, Naval Air Test Center, Patuxent River, Maryland in 1976.

EXPERIENCE: O'Connor began active duty with the United States Marine Corps in June 1968. He received his Naval Aviator's wings in June 1970, and served as an attack pilot flying the A-4 Skyhawk and the AV-8A Harrier on land and sea assignments in the United States, Europe and the Western Pacific.

From 1975 through 1979 O'Connor served as a test pilot with the Naval Air Test Center at Patuxent River, Maryland. During this assignment, he participated in evaluations of various conventional and Vertical/Short Takeoff and Landing (VSTOL) aircraft, including the A-4, OV-10, AV-8, and X-22 research aircraft. Following this assignment he served as the Deputy Program Manager (Acquisition) for the AV-8 program at the Naval Air Systems Command in Washington, DC.

O'Connor was selected for the astronaut program in May 1980. After a one-year initial training program at NASA's Johnson Space Center in Houston, Texas, O'Connor served in a variety of functions in support of the first test flights of the Space Shuttle, including simulator test pilot for STS-1 and 2, safety/photo chase pilot for STS-3, and support crew for STS-4. He was CAPCOM (spacecraft communicator) for STS-5 through STS-9. He also served as Aviation Safety Officer for the Astronaut Corps.

When the Challenger and its crew were lost in January, 1986 O'Connor was given a number of safety and management assignments over the next three years as the Space Agency recovered from the disaster. In the first days after the accident, he organized the initial wreckage reassembley activities at Cape Canaveral. Then he established and managed the operation of the NASA Headquarters Action Center, the link between NASA and the Presidential Blue Ribbon Accident Investigation Panel (The Rogers Commission). In March 1986 he was assigned duties as Assistant (Operations) to the Space Shuttle Program Manager, as well as first Chairman of NASA's new Space Flight Safety Panel: jobs he held until February 1988 and 1989 respectively. He concurrently served as the astronaut representative on the Space Shuttle System Safety Review Panel during its extensive return to flight activities. He subsequently served as Deputy Director of Flight Crew Operations from February 1988 until August 1991.

O'Connor left NASA in August 1991 to become commanding officer of the Marine Aviation Detachment, Naval Air Test Center, Patuxent River. Within a year he returned to NASA Headquarters in Washington, retiring from the Marine Corps to become the Deputy Associate Administrator for Space Flight. He was immediately assigned the task of developing a comprehensive flight safety improvement plan for the Space Shuttle, working closely with Congress and the Administration for funding of the major upgrade program. Then in late summer 1992, he was assigned as leader of the negotiating team that traveled to Moscow to establish the framework for what subsequently became the Shuttle/MIR program.

O'Connor left NASA in February 1996 to become an aerospace consultant. He also served on several advisory boards, and consulted for several government and industry organizations on matters dealing with aerospace safety. From 1999 through 2002 he served as Director of Engineering for Futron Corporation, a Bethesda Maryland based company providing safety and risk management consulting to DOD, DOE, the FAA, NASA and industry.

FLIGHT EXPERIENCE: O'Connor has flown over 5,000 hours in over 40 types of aircraft. O'Connor was pilot on STS-61B in 1985. At the time, this flight carried the heaviest payload weight to orbit by the Space Shuttle and was the first to deploy four satellites. Then in 1991, O'Connor commanded STS-40, the first Space shuttle mission dedicated totally to life science studies. With these two missions, he has 386 hours in space covering nearly six million miles in 253 orbits of the earth.

In June 2002, Mr. O'Connor rejoined NASA as Associate Administrator, Office of Safety and Mission Assurance (OSMA), at the National Aeronautics and Space Administration (NASA) Headquarters in Washington DC. In August 2004, Mr. O’Connor’s title changed to Chief, Safety and Mission Assurance. His office has functional responsibility for the safety, reliability, maintainability and quality assurance of all NASA programs.