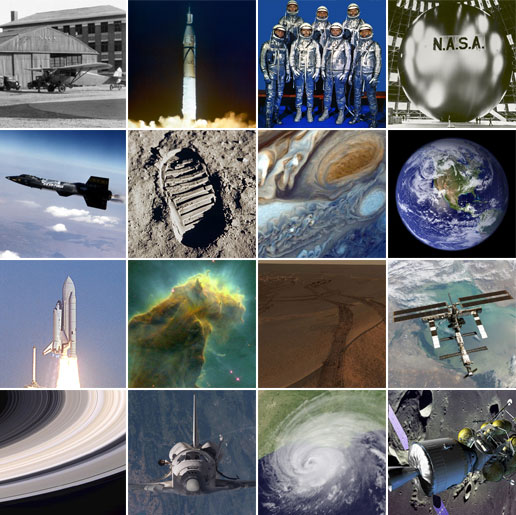 Since its founding on October 1, 1958, NASA has pushed the boundaries of human exploration. We've put footprints on the moon and tire tracks on Mars. We've given the world breathtaking images of our home planet, our solar system and the galaxies beyond. We invented the first re-usable spacecraft and, with our international partners, established a permanent human presence in space. Along the way, we've pioneered new technologies that have improved people's lives.

Now, we're blazing a new trail into the cosmos. Before the end of the next decade, NASA astronauts will again explore the surface of the moon, traveling in a new spaceship that builds on the best of Apollo and shuttle technology. And this time, we're going to stay, building outposts and paving the way for eventual journeys to Mars and beyond.

Image Details:
First row, from left:
A 1931 photo shows the original hangar at NASA's predecessor, the National Advisory Committee for Aeronautics (NACA). The first American satellite in orbit, Explorer 1, launches in January 1958. The "Original Seven" Mercury astronauts were selected in 1959. The experimental Echo project used large metallic balloons to bounce signals from one point on Earth to another.

Second row, from left:
The X-15 hypersonic research aircraft flew for nearly 10 years, from June 1959 to October 1968. Apollo 11 astronauts left the first bootprints on the moon in July 1969. Jupiter's Great Red Spot, seen from one of the twin Voyager spacecraft that launched in 1977. NASA satellites helped create the "blue marble," a detailed image of Earth.

Third row, from left:
Columbia launches on the first shuttle mission in April 1981. Image of the Eagle Nebula from the Hubble Space Telescope. The Mars rover Opportunity looks back at its tracks on the red planet. The international space station is humanity's first permanent orbital outpost.

Fourth row, from left:
The Cassini spacecraft has been sending back images of Saturn, it's rings and moons since July 2004. Discovery returns the space shuttle fleet to flight in July 2005. NASA satellites help scientists and forecasters watch powerful hurricanes. Artist's concept of NASA's next spaceship, the crew exploration vehicle, docked with a lander in lunar orbit.

Photo credit: NASA
› Back To Top