A Message From Administrator Michael Griffin 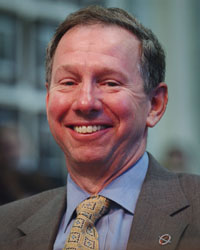 Good afternoon to the NASA Family. It's great to be back! Last evening, I received the tremendous honor of being confirmed by the United States Senate as NASA's 11th Administrator. I am grateful to the President for his confidence in me and humbled by the opportunity to lead our team during this most promising time for space exploration.

I will get out to all of the NASA Centers and meet with our team members as soon as possible, so that I can hear your questions and comments. In the meantime, please allow me to give you an idea of what I would like to see NASA accomplish during my tenure. In my confirmation hearing testimony to the Senate Commerce Committee, I affirmed that my priorities as Administrator, consistent with the President's Vision for Space Exploration, will be: I have great confidence in the team that will carry out our nation's exciting, outward-focused, destination-oriented program. This evening, I look forward to another step in our journey, the launch of the Expedition 11 crewmembers from the Baikonur Cosmodrome in Kazakhstan to the International Space Station. In the coming days, I will spend a good deal of my time reviewing our progress toward returning the Space Shuttle safely to flight, as we approach the initial launch window for the STS-114 Discovery mission. In addition to Space Operations, I will review the activities of our Exploration Systems, Science, and Aeronautics Mission Directorates and those of our various supporting functions.

It is my firm belief that the United States can afford well-executed, vigorous programs in both robotic and human space exploration, as well as in Earth science and aeronautics.

I look forward to working together to advance a bold exploration program. I share with you a great sense of privilege that we have been given the wonderful opportunity to extend humanity's reach throughout the solar system.