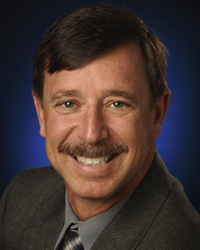 Scott J. Horowitz is the Associate Administrator for the Exploration Systems Mission Directorate. A former NASA astronaut and a retired U.S. Air Force Colonel, he will lead the agency in the development of the nation's new spacecraft that will return astronauts to the moon and travel to Mars and other destinations in the solar system.

After retiring from NASA and the Air Force in 2004, Horowitz joined ATK Thiokol, Inc., as director of space transportation and exploration. At ATK, he was responsible for developing the company's strategy to support NASA's Vision for Space Exploration.

Horowitz joined the Air Force after graduating with a masters and doctorate in aerospace engineering from the Georgia Institute of Technology. He received his undergraduate degree in engineering from California State University at Northridge.

During his military career, he was an instructor pilot, F-15 fighter pilot and, after attending the Air Force Test Pilot School, served an assignment as a test pilot. He has logged more than 5,000 hours in more than 50 different aircraft. Horowitz also served as an adjunct professor at Embry Riddle University and later as a professor at California State University at Fresno.

NASA selected him as an astronaut pilot in 1992. A veteran of four space shuttle missions, Horowitz made his first flight in 1996 on a microgravity science mission. His other missions included servicing the Hubble Space Telescope and two flights to the international space station. He has logged more than 1,138 hours in space.