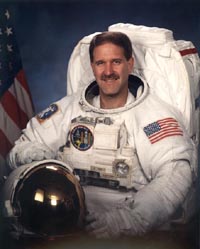 Grunsfeld, who played an integral role in two Space Shuttle servicing missions to the Hubble Space Telescope, has studied astronomy and physics throughout his career. As NASA's Chief Scientist, he'll work to ensure the scientific merit of the agency's programs.

"John has a deep interest in astronautical science and has the hands-on experience to back up what he has taught in the classroom," said Administrator O'Keefe. "With his background in physics and astronomy, John is a natural selection to direct NASA's important space-based science objectives."

Grunsfeld is a veteran of four Space Shuttle flights. In 1999 and 2002 he took part in a total of five successful spacewalks to upgrade Hubble. As a Mission Specialist on STS-103, Grunsfeld helped install new gyroscopes and scientific instruments and upgraded Hubble's systems. During STS-109, he served as Payload Commander, in charge of the spacewalking activities and the Hubble payload. He and three other crewmates installed a new digital camera, cooling system for the infrared camera, new solar arrays, and power system.

Grunsfeld was selected as a NASA astronaut in 1992. His first flight assignment came in 1995 on board the Space Shuttle Endeavour on STS-67. In 1997, Grunsfeld served as flight engineer for the Space Shuttle Atlantis during STS-81 and a 10-day mission to Russia's Mir space station. He has logged over 45 days in space, including 37 hours and 32 minutes working outside the Space Shuttle.

Grunsfeld has been honored with the W.D. Grainger Fellow in Experimental Physics and was awarded the NASA Distinguished Service Medal earlier this year. He was awarded NASA Space Flight Medals in 1995, 1997, 1999, and 2002, and earned the agency's Exceptional Service Medal in 1997, 1998, and 2000.