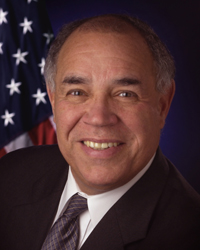 Frederick D. Gregory is the Deputy Administrator of NASA. He assumed this position in August 2002. He serves as the chief operating officer for the Agency and reports directly to NASA’s Administrator. He is responsible for directing and managing many of the programs as well as the day-to-day operations and activities at NASA. From February to April 2005, Gregory was the Acting NASA Administrator. Prior to becoming the Deputy Administrator, Mr. Gregory served as the Associate Administrator for Space Flight and was responsible for overseeing the management of the International Space Station; Space Shuttle operations; Space Access using Expendable Launch Vehicles for commercial launch services; Space Communications; and Advanced Programs. He held that position from December 2001 to August 2002.

Mr. Gregory has extensive experience as an astronaut, test pilot, and manager of flight safety programs and launch support operations. As a NASA astronaut, he logged 455 hours in space: as pilot for the Orbiter Challenger (STS-51B) in 1985, as spacecraft commander aboard Discovery (STS-33) in 1989, and as spacecraft commander aboard Atlantis (STS-44) in 1991. Mr. Gregory served in several key positions as an astronaut, including Astronaut Office Representative at the Kennedy Space Center, for the first Space Shuttle flights (STS-1 and STS-2); lead Capsule Communicator (CAPCOM); Chief, Operational Safety at NASA Headquarters; and Chief, Astronaut Training. He also served on the Orbiter Configuration Control Board and Space Shuttle Program Control Board.

Mr. Gregory retired as a Colonel in the United States Air Force in December 1993 after logging 7,000 hours in more than 50 types of aircraft, including 550 combat missions in Vietnam. His 30-year Air Force career included serving as a helicopter pilot and as a fighter pilot. He graduated from the United States Naval Test Pilot School and served as an engineering test pilot for the Air Force and for NASA. He was selected as a pilot Astronaut in January 1978.

Mr. Gregory holds a Bachelor of Science degree from the United States Air Force Academy and a Master's degree in Information Systems from George Washington University. He is a member or past member of numerous societies, including the Society of Experimental Test Pilots, American Helicopter Society, Air Force Academy Association of Graduates, the National Technical Association, the Tuskegee Airmen, the Order of the Daedalians, and the Association of Space Explorers. He has been or currently is a board member of the following organizations: Maryland Science Center; Young Astronaut Council; Kaiser-Permanente; the Photonics Laboratory at Fisk University; and the Engineering College at Howard University.

He is married to the former Barbara Archer. They have two children and four grandchildren.