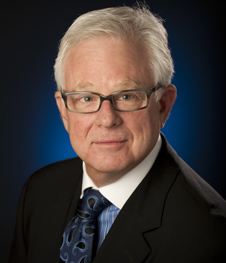 Morrie Goodman, Assistant Administrator for Public Affairs.
Image Credit: NASA/Bill Ingalls. Morrie Goodman was appointed NASA's assistant administrator for public affairs on Oct. 26, 2009. In this role, Goodman directs internal and external communications for NASA and serves as a senior advisor to the agency’s leadership. He is responsible for managing an agency-wide staff that implements all aspects of NASA's external and internal communications.

Before joining NASA, Goodman was a nationally recognized, award-winning crisis communications and emergency information professional at his company, Goodman Communications. His clients included aviation and aerospace firms, the Department of Homeland Security, and other federal and state agencies. Goodman also worked in the aerospace industry as vice president of communications for Boeing's Air Traffic Management Division.

Goodman’s resume includes prior leadership roles in the federal government. He was director of Strategic Communications and Emergency Information at the Federal Emergency Management Agency from January 1993 to November 1998. At FEMA, he managed crisis communications for some of the nation's worst disasters, including the Northridge earthquake, the Oklahoma City bombing, the Great Midwest floods, Southern California wildfires, hurricanes, and more than 200 other presidentially declared disasters. He worked with the National Transportation Safety Board after the explosion of TWA Flight 800 and managed the board's hearings.

Goodman served as press secretary at the Department of Commerce from 1998 to 2001 under Secretaries William M. Daley and Norman Y. Mineta. There, he was a key member of the team working on permanent trade relations with China. Also a veteran journalist, he spent 17 years in television news as a reporter, producer and news director. He was the senior producer for CNN on site at the Kennedy Space Center during the Challenger tragedy.

For his work in disaster communications, Goodman has won several awards, including the Federal Technology Leadership Award and top honors from the Public Relations Society of America. The latter award was for his development of innovative communications, including live television programming and newsletters, intended to keep disaster victims informed in the immediate aftermath of and recovery from disasters.

Goodman earned a bachelor of science degree from the University of Kansas. He currently resides in Washington, DC.