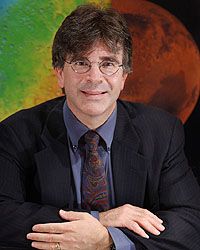 Dr. James B. Garvin is NASA's Chief Scientist, serving the Agency and the Administrator as the primary advisor for the entire NASA science portfolio. His duties include advising the senior leaders of the Agency on matters that range from how science fits into the Vision for Space Exploration to the basic scientific research and development priorities for the Agency. In his former capacity as the Lead NASA Scientist for Mars Exploration, Dr. Garvin was instrumental in formulating and developing the NASA scientific strategy for Mars, and most recently, that for the Moon as well.

Dr. Garvin has been a NASA scientist for twenty years, which spans his entire career beyond graduate school. He came to NASA's Goddard Space Flight Center in late 1984 as a staff scientist, and soon thereafter he helped catalyze development of new spaceflight experiments for exploring the landscapes of Mars, the Moon, and planet Earth. As NASA's Chief Scientist, Dr. Garvin brings the experience gained from his 20 year career as a NASA scientist, spanning such disciplines as Earth system science, Mars Exploration, lunar exploration, Venus, asteroids, and the outer planets. At present he remains a Co-investigator on NASA's ongoing Mars Global Surveyor, Canada's Radarsat, and ESA's Envisat missions.

Dr. Garvin was born in a blizzard in Poughkeepsie, New York and ever since his earliest childhood he demonstrated a fascination with the Moon, Mars, rocks, and science. His fascination with the natural world embraced the space frontier, and Garvin was mesmerized by desert landscapes of the Middle East and Australia during his time abroad as a child. Upon graduating high school with highest honors, he attended Brown University, where he was catalyzed to pursue a career in the Earth and Planetary Sciences by professors T. A. Mutch, J. W. Head, and R. A. F. Grieve. He graduated from Brown magna cum laude in 1978 and was elected to Phi Beta Kappa, in part because of his work in the history of science and the physical sciences. After receiving his Masters of Science from Stanford in 1979, Garvin returned to Brown to pursue a PhD in planetary geological sciences under Professor T. A. Mutch and J. W. Head in 1980, and completed his Ph.D in 1984. During this time, he participated in analysis of images from the surface of Venus from the Soviet Venera 9, 10, 13, 14 probes and published numerous research articles comparing spacecraft views of the surfaces of Mars, Venus, and the Moon.

Garvin came to NASA's Goddard Space Flight Center in late 1984 and soon thereafter helped lead the development of a new class of remote sensing instrument, the laser altimeter, for the purpose of measuring the human-scale relief of planetary landscapes. In addition, he developed new paradigms for understanding the impact cratering process on Earth, Mars and the Moon. He has published over 60 research articles, ranging from remote sensing oceanic islands on Earth, to the characteristics of rocks on Mars, Venus, and the Moon. Garvin served as Chief Scientist for the Shuttle Laser Altimeter (SLA) experiment, which first flew in Earth orbit on the Space Shuttle Endeavour (STS-72) in January 1996, and in doing so, he helped develop techniques for measuring tree heights from space, as well as the shapes of dynamic landscapes. SLA flew again on the Space Shuttle Atlantis (STS-85) in 1997, and in doing so, pioneered the measurement of the vertical surface roughness of a planetary surface, as a pathfinder for making such measurements of Mars and the Moon. As one of the founding fathers of the Mars Orbiter Laser Altimeter (MOLA), Garvin developed methods for analyzing landscape features such as impact craters and volcanoes suitable for unraveling the geologic history of other planets. In 1998, Dr. Garvin discovered how ice-filled impact craters on Mars reflect the history of ice cover on the red planet. As a career scientist at NASA, Dr. Garvin received numerous outstanding performance awards, group achievement awards, and was invited to be a keynote speaker at dozens of conferences, including those in Spain, Iceland, Finland, and the US.

During his lengthy career as a NASA scientist, Dr. Garvin served the cause of human exploration in several ways. In 1986-1987, Garvin represented science on Sally Ride's task group, and helped develop the case for a stepping stone approach to humans in deep space, including lunar outposts and science-driven missions to Mars. During the 1990's Garvin served on NASA's science policy development team responsible for shaping NASA's approach to scientific research. In 1999, the NASA Administrator asked Garvin to chair the Next Decade Planning Team (DPT) for the purpose of developing science-driven, technology-enabled pathways for human exploration beyond low-Earth orbit. In chairing the DPT team, Garvin and his team helped shape the antecedents of what became the Vision for Space Exploration (VSE), which is NASA' current direction and mandate.

Dr. Garvin came to NASA Headquarters in early 2000 in the aftermath of the setbacks associated with the Mars 1998 missions (Mars Climate Orbiter and Mars Polar Lander). Garvin was the lead scientist on the NASA team that restructured Mars exploration in 2000, and the first scientist within NASA to endorse the strategy of sending twin Mars Exploration Rovers to the surface of the red planet in 2003. As NASA's lead scientist for Mars exploration, Garvin worked with the scientific community to develop a discovery-responsive, resilient program of robotic exploration for Mars, with attention to preparation for human exploration. The ongoing successes of the Mars Global Surveyor, the Mars Odyssey, and the twin Mars Exploration Rovers Spirit and Opportunity attest to Dr. Garvin's positive influence on the scientific direction of NASA's planetary exploration programs. In late 2003, Dr. Garvin helped craft the initial pathways for lunar exploration and developed the requirements for the first robotic precursor missions to the Moon in the aftermath of the President's January 14, 2004 speech that outlined the Vision for Space Exploration. He has led the formulation and development of the exploration measurement goals for the 2008 Lunar Reconnaissance Orbiter mission since January 2004, culminating in the selection of its breakthrough payload in Fall 2004.

Dr. Garvin has received two NASA Outstanding Leadership medals for his work developing the highly successful science strategy behind the current Mars Exploration Program, and also for his leadership in the formulation of the science role of the Mars Exploration Rover mission. Most recently, Dr. Garvin received the 2004 William Rogers Award from Brown University, an award given annually to the alumnus whose contributions to society are noteworthy at a national and international level.

As part of his science outreach activities for the Agency, Dr. Garvin has frequently appeared on television. In January of 2004, Garvin appeared on "Late Night with David Letterman" as NASA's Mars expert, and in doing so helped bring the magic of Mars exploration to the late night audience in an accessible manner. Dr. Garvin enjoys working with educators to excite and inspire children (K-12) to think about space exploration and NASA. At present he is working with the JASON Foundation on their upcoming program for educating middle-school students about Mars. In 2003, Dr. Garvin worked with the Discovery Channel to film "Mars on Earth" in his beloved Iceland as part of a television program entitled "Mars Rocks". In this program, Dr. Garvin was able to film on location in Iceland at some of the most evocative Mars-like vistas on planet Earth to help bring Mars exploration to the public.

Dr. Garvin lives with his wife Cindy, his children Zachary (9) and Danica (7), in Columbia, Maryland. He enjoys U2 music, ice hockey, taking "fungus walks" with his family and dog (a Bouvier des Flandres named Yogi), and he dreams of exploring the Mars-like landscapes of Iceland with his wife and children. He has never met a rock that has lied to him and hopes that humans will someday return priceless rock samples from the Moon and Mars for the people of planet Earth to scrutinize and decipher.