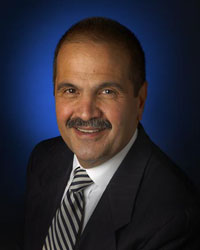 Alphonso V. Diaz was appointed NASA's Associate Administrator of Science on Aug. 8, 2004. Previously, he had been serving as Director of NASA’s Goddard Space Flight Center (GSFC) since Jan. 12, 1998. Prior to becoming GSFC’s Director, he was the Deputy Director of Goddard from 1996. Before arriving at Goddard in 1996, Diaz was Deputy Associate Administrator for Space Science at NASA Headquarters from 1993 – 1996.

As GSFC’s Director, Diaz was responsible for planning, organizing, and directing NASA’s Earth science, space science, and technology programs assigned to the Center. Goddard Space Flight Center is engaged in developing and operating scientific spacecraft. The Center continues to seek excellence in science and technology as demonstrated by many discoveries and advances in its history, from the first mapping of the Antarctic ozone hole to determining the very early structure of the universe.

From 1989 to March 1993, Diaz served as Deputy Associate Administrator and Chief Engineer of the Office of Space Science at NASA Headquarters. In that capacity, he was responsible for management direction and oversight of the space science flight program policy, launch vehicle requirements, technology infusion requirements, and mission study reviews and assessments. Diaz led the Agency committee charted by the Administrator to study proposals related to science institutes and to provide recommendations for implementation. Prior key positions with NASA include Deputy Associate Administrator for the former Office of Space Science and Applications (OSSA), Assistant Associate Administrator for Programs within OSSA, and Director for Strategic Plan and Programs for Space Station.

Diaz began his career at NASA’s Langley Research Center in 1964. At Langley, he worked in a variety of technical management positions, principally on the Viking Project, GAS Chromatograph Mass Spectrometer. This scientific instrument was the first to analyze the surface material on Mars in 1976. In 1979, Diaz began his work at NASA Headquarters, where he served in a variety of positions. Aside from positions mentioned above, Diaz also has served as the International Solar-Polar Mission (now Ulysses Mission) Program Manager, the Galileo Program Manager, Manager of Planetary Advanced Programs, and as Deputy Director of the Solar System Exploration Division. He later served as Assistant Associate Administrator for Space Station within OSSA, managing all activities on the use of the planned Space Station for scientific research, and providing strategic planning guidance for OSSA’s overall program of scientific exploration.

He is an Associate Fellow of the American Institute of Aeronautics and Astronautics and is married to Angela Phillips Diaz. They reside in Takoma Park, Maryland.
› Back To Top