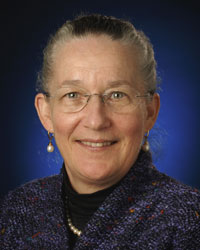 A scientist with training in civil and environmental engineering as well as biological sciences and microbial ecology, Cleave most recently served as deputy associate administrator (advanced planning) in the Office of Earth Science at NASA Headquarters.

In 1991 she joined NASA's Goddard Space Flight Center in Greenbelt, Md., where she worked as the project manager for SeaWiFS (Sea-viewing, Wide-Field-of-view-Sensor), an ocean color sensor that monitors vegetation globally.

A veteran of two space shuttle flights, Cleave flew as a mission specialist aboard STS-61B in 1985 and STS-30 in 1989. She also served in a range of technical and engineering capacities supporting the shuttle program, including as CAPCOM (capsule communicator) for five shuttle flights.

She received a bachelor of science degree in biological sciences from Colorado State University and a master of science in microbial ecology and a doctorate in civil and environmental engineering from Utah State University. Her work at the Ecology Center and the Utah Water Research Laboratory at Utah State University from 1971 to 1980 included research on the algal component of cold desert soil crusts and other projects to assess water makeup, process data about surface impoundments, and design an algal bioassay technique for the western states.

Cleave is the recipient of numerous awards, including the American Astronautical Society Flight Achievement Award, 1989; NASA Exceptional Achievement Medal, 1994; Friend of Mongolia, 1995; and NASA Engineer of the Year, 1998.

She is a member of the Society for Professional Engineers, Women in Aerospace, Tri-Beta, Sigma XI, and Tau Beta Pi.