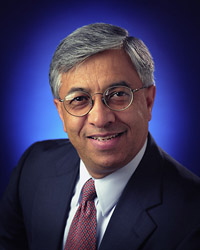 Dr. Ghassem Asrar joined NASA in 1987 and currently serves as the Science Deputy Associate Administrator in transformed organization that became effective August 1, 2004. Prior to this reorganization, he served as Associate Administrator for the Earth Science Enterprise (ESE) since February 1998. He was a key player in the Earth Science program from its beginnings-- from leading an international science team promoting the Earth Observing System (EOS)-- to his current vision for the Enterprise in the 21st Century.

While serving as the Associate Administrator, ESE successfully launched the first EOS satellites and developed a comprehensive data and information system for managing the wealth of information resulting from these missions.

New measurements from Earth Science satellites provided new insights into the connections between Earth's land, oceans, atmosphere, ice, and life. They fundamentally changed the way we study and monitor our home planet. Most importantly, the information obtained from these satellites has been available to scientists, governments, commercial firms, educators, and the public worldwide.

Before joining NASA, Dr. Asrar combined his interest and expertise in research with his keen desire to educate the next generation of Earth Scientists. He worked for 9 years in academia at graduate and post-graduate levels. He established the NASA Earth System Science Fellowship Program -- a Program which has trained more than 500 young scientists to date.

Dr. Asrar earned graduate degrees in Civil Engineering and Environmental Physics from Michigan State University, East Lansing, Michigan. Dr. Asrar is an active member of several professional societies, including the American Geophysical Union, the American Meteorological Society, and the Geoscience and Remote Sensing Society. He was recently elected a fellow of the Institute of Electrical and Electronic Engineers (IEEE)and American Meteorological Society.