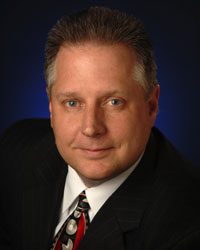 Appointed to the Federal Senior Executive Service in 1999, Rick Arbuthnot is recognized for his executive leadership and credited with introducing significant initiatives across the Agency, such as the Competency Management System, Executive Succession Planning, and Manage to Budget. He is also recognized for his expertise in organizational structure and design. Most recently, he managed all aspects of NASA's Shared Services effort and has served as the Executive Director, NASA Shared Services Center (NSSC), since March, 2004.

As Executive Director, Rick managed the largest A-76 public-private procurement competition in the Agency’s history, as well as leading the Agency Transition Team, tasked with executing the minute details associated with consolidating Agency-wide administrative activities across ten geographically dispersed centers in the areas of Human Resources (HR), Procurement, Financial Management and Information Technology. In addition to leading the competition and Agency transition activities, Rick now manages all aspects of activating NASA’s newest field Center, including defining the organization structure and staffing the nearly 500-person organization, ensuring all facility, IT and business systems, including chargeback mechanisms, are in place to operate the organization.

Further, Rick works tirelessly to build a public-private partnership between NASA and the Service Provider, Computer Sciences Corporation (CSC), to ensure the organization is on track to provide the best possible services to NASA and it’s customers at the lowest possible price. In March 2007 the NSSC was nationally recognized by the International Quality and Productivity Center as the Runner Up for the Best New Shared Services Organization (less than 3 years in operation) Excellence Award.

From 1999 to 2004, Rick served in a key leadership role at the Kennedy Space Center (KSC), directing all aspects of human resources (HR) for approximately 1,800 highly trained engineers, administrative professionals and technicians, who oversee the Nation's primary space launch center and its large supporting contractor workforce of approximately 12,000 employees. He had project control responsibility for the $187 million dollar annual compensation budget, which included funds for salaries, training and development, and awards. He is recognized for the cutting-edge initiatives he accomplished while managing the NASA civil service HR program at the KSC, in the areas of HR management, policy development, training, succession planning, workforce planning and skills analysis, and knowledge management tools.

Rick is a graduate of Kansas State University with a Master's degree in Public Administration (1985), and holds a Bachelor of Science degree in Political Science (1981) from Wayne State College in Wayne, Nebraska. Upon graduation, he was appointed by the Reagan Administration as a Presidential Management Intern with NASA at the Johnson Space Center in Houston, Texas, where he served as a Personnel Management Specialist, then as a Special Assistant for Legislative Affairs to the Chief Financial Officer (CFO).

In 1990 he became the NASA Liaison to U.S. Senator Robert Byrd, then Chairman of the Senate Appropriations Committee and later accepted an assignment to serve as the Executive Officer to the Associate Administrator for Human Resources and Education at NASA Headquarters in Washington, D.C. Rick served as the Director of Human Resources at Stennis Space Center (SSC) in Bay St. Louis, Mississippi from 1993 - 1998, and in 1999 was asked to join the Kennedy Space Center (KSC) as Director of Administration, where he chaired the KSC 2000 project, a major organizational restructure.

Rick is married to the former Alicia MacFarland and they have a daughter, Avery, and a son, Christopher.