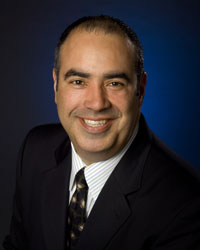 Dean Acosta is an Emmy Award winning journalist who became NASA's deputy assistant administrator for the Office of Public Affairs in April 2003. He recently added the title of press secretary in support of NASA’s 11th Administrator Michael Griffin.

Acosta is the official spokesman for the agency and its senior leadership. He is also responsible for managing an agency-wide staff of 350 that implements all aspects of the agency’s media relations, public outreach and internal communications.

He is part of the senior leadership team responsible for advising the Office of the Administrator concerning all aspects of public affairs. This includes developing, implementing, planning, and controlling all elements of the agency-wide public affairs activities. He chairs the editorial board of the highly popular NASA Web Portal and is the Internet site's publisher.

As part of his duties, Acosta: Acosta came to NASA after a very successful career as a television, radio and print journalist. His 12-year on-air career culminated with Emmy Award winning recognition for his work as an investigative reporter in Phoenix. He has hosted his own radio show, written his own newspaper column and covered the energy policy beat all over the world with stops in Russia, Japan, Brazil, Austria and England.

He is an active member of the National Association of Hispanic Journalists. In his free time he mentors aspiring journalists.

Acosta graduated from the University of Texas in San Antonio with a bachelor’s in political science.