NASA in the News 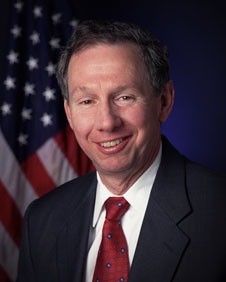 On October 1, NASA celebrates its 47th anniversary. This is a time to take stock of the accomplishments our agency has made in the past and to look forward to the tremendous opportunity we have to assume the mantle of 21st century leadership in the continued exploration and use of space.

The Vision for Space Exploration presented by President George W. Bush gives our agency a new strategic direction, whose pursuit will enhance our nation's scientific, economic and security interests, and will profoundly influence the course of human history.

In the wake of devastating damage from hurricanes Katrina and Rita, there have been recent concerns about whether America's investment in NASA is a luxury we can continue to afford. But just as this country will not eliminate the Navy or the Air Force in order to address pressing current issues, I believe NASA and our civil space program will always have a place in our national life. We will never have sufficient resources to pursue all of the possible goals that might be desirable to accomplish. Given this, the proper debate is not over whether or not we will have a space program, but rather which goals it should pursue. I believe that, if money is to be spent on space, there is little doubt that a huge majority of Americans would prefer to spend it on an exciting, outward-focused, destination-oriented program. This is the program President Bush has put before NASA and the American people.

In securing the public's support for such a course, we must communicate openly and honestly with our fellow citizens about our current capabilities and limitations. To implement the Vision, we will need to develop a new generation of space craft and launch systems. We recently unveiled our plan for this development to Congress and the media. I believe you have seen that the architecture we have put forth accomplishes the goals of the Vision with the greatest economy and the maximum possible utility of our legacy systems and infrastructure, derived from the Apollo and shuttle programs.

Further, the Vision presents us with a rational way to utilize our space shuttle and International Space Station assets in the coming years for promising longer-term purposes. As the authors of the Columbia Accident Investigation Board noted so eloquently, the shuttle and station programs are by themselves insufficient to justify America's investment in human space exploration. The Vision puts these programs into a larger and grander context, where their contribution to our longer term goals becomes apparent.

As we look forward to the events that will define the 21st century, no doubt the expansion of civilization into space will be among the great achievements of this era. It is now our nation's obligation to lead, to seize the opportunity to explore worlds beyond our own, and to help shape the destiny of our world, for centuries to come. Clearly the human imperative to explore will be satisfied by others if not by us. What the United States gains from a robust, focused program of human space exploration is the opportunity to carry our principles and values along on the inevitable outward migration of humanity into the solar system. I am confident that we at NASA are up to this great challenge.