NASA is Telling Its Story -- One Person at a Time

WASHINGTON -- Gwen sported a red ribbon emblazoned with "I'm a winner" after her rocket successfully delivered its payload to Saturn.

"No you're not," said their mother, Heather Anderson of suburban Washington, who had clearly been paying attention to exhibitors' talks. "NASA's not planning a trip to Saturn." 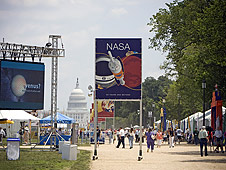 Thousands were on hand for the opening day of the 42nd annual Smithsonian Folklife festival on the Mall in Washington, D.C. NASA is sharing its 50th anniversary celebration with the public at the festival.
Credit: NASA/Sean Smith

Mars, yes. The moon, certainly. The girls and their mother learned about NASA's aspirations toward both Wednesday on the opening day of the Smithsonian Folklife Festival on the Mall.

"There will be a million visitors here," said Shana Dale, NASA's deputy administrator, who shared the agency's part in the opening ceremonies with a message from the International Space Station and former astronaut Mike Coats, director of NASA's Johnson Space Center.

"It's our chance to reengage with the American public," Dale added.

And with some Bhutanese. His Royal Highness the Prince of Bhutan, Jigyel Ugyen Wangchuck, and the nation's minister for home and cultural affairs shared the stage with Dale and Texas Gov. Rick Perry in a tent labeled "Dance Hall" for the opening ceremonies. All around were tents and trailers that contain exhibits that energetic NASA spokespeople have hauled to the nation's capital from all over the country to be part of this event. All 10 NASA centers are represented.

Sighted just above the trailers was the Capitol Dome, just to remind everyone where they were.

The agency's exhibits cover the better part of two city blocks on the Mall, and their reason for being here is, at least in part, celebratory.

NASA: 50 Years and Beyond, is the theme of the agency's presence, and it's not lost on others who are celebrating this 42nd annual Folklife Festival. "In their truly mythic way, they are stretching the bounds of our imaginations," said Richard Kurin, the acting under secretary for history, art and culture of the Smithsonian Institution.

NASA's mission is to interact with the public, mostly in one-on-one sessions. That's why hundreds of agency employees and contractors are with the exhibits.

The sisters, young Gwen and younger Amanda, learned about propulsion from camp counselors from Stennis Space Center. They gave the children a balloon to blow up, then fastened a clothespin over its nozzle. They then taped a small paper cup "payload" to the balloon's front, taped a soda straw to its side and turned the rocket over to Corderis Brown, who threaded a fishing line -- anchored on "Saturn" -- into the straw on the side of the space ship and counted down: "Five-four-three-two-one."

At zero, the tot pinched the clothespin, releasing the air and sending the balloon aloft to Saturn. A hit earned a red "I'm a winner" ribbon. A miss earned, well, Amanda's chagrin. 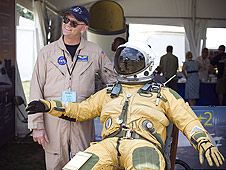 Everywhere, there were reminders of NASA's first 50 years and, in some cases, of its next 50.

Nearby, Nils Larson, a test pilot from Dryden Research Center, showed a pressure suit that he has worn while flying NASA's WB-57 and ER-2. On its knee was a notepad on which was written, "NASA rocks."

"Know the question I've gotten most?" Larson said. "It's why is there a Whiffle ball on the front?"

The answer is that the suit is inflated while aloft, and blowing up the suit pushes the helmet up in front of the pilot's eyes. The pilot pulls on the Whiffle ball and the block-and-tackle to which it's attached pulls the helmet down so the pilot can see.

A 6-year-old challenged Robert Howard, a Johnson Space Center employee who was demonstrating the architecture of the Ares I and Ares V rockets that will carry astronauts to the International Space Station, moon and beyond, beginning in less than a decade.

"He named all of the parts of the Ares I," Howard said, both bewildered and bemused. "It was amazing."

It's the power of television, and of an increasingly computer literate generation that is stepping up with questions that surprised many of the exhibitors.

"So many people have been watching Discovery Channel," said Jeff Jones, a NASA Langley project manager who was explaining to anyone who asked about developing the thermal protection system that will allow Orion to reenter the Earth's atmosphere from space.

"They already know what a heat shield is. They come in and ask how does it work? 'What are the problems you have to deal with in developing it?'

"It's making this more interesting to me."

Greg Gatling of NASA Langley demonstrated a small wind tunnel, letting visitors choose the flight test article. Monsi Roman of Marshall Space Flight Center showed an oxygen system that's on the International Space Station and a water system that will be when the Space Shuttle ferries it aloft in the fall. Candice Nance of Ames Research Center gave the public a history lesson on the Helios and its contribution to the study of fuel cells.

Through it all, the interaction was one-on-one.

"They wanted us to show the culture of NASA by exchanging with people," said Gilda Miner, a NASA Langley employee showing NASA Ice Reduction Flexible Forms, a substance that inhibits the formation of ice while remaining flexible in temperatures between minus-320 degrees and plus 500 degrees Fahrenheit.

The festival will go on for two weeks, and many of the exhibits will see shift changes by this weekend, with other NASA employees moving in to work.

"We have a rich heritage," said NASA Deputy Administrator Shana Dale, "and we want to show it to people. We want them to be cognizant of NASA's past and of the things we want to do in the future."